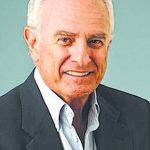 There is hardly anything more refreshing than a Baptist preacher with a sense of humor which was clearly evidenced in the life of Jon Appleton, former pastor of the First Baptist Church of Athens. He was a popular local personality who could cross social lines with the dexterity of a high wire walker, maintaining friendships with those of other faiths without losing rapport with his own constituency.

Jon was never at a loss for words – even when the joke was on him.

As a raconteur, he ranked with the best. He was resourceful and clever.  He enjoyed making people laugh. While he appreciated the fundamental tenets of the scriptures, he was not so rigid that he became narrow and unforgiving.

His sermons were laced with humor and carried the most telling feature – they were brief. Nothing worse than a minister who drones on past 20 minutes. With some preachers you could read half of “War and Peace” by the time they call for the benediction. That trait of brevity, alone, made our friend Jon an unorthodox Baptist. The following story would have elicited, from him, a generous laugh.

In a small Southern town, a Baptist kid and a Catholic kid became close friends. They decided to trade visits to the other’s church. They visited the Catholic church first.  The Catholic kid, as the service moved along, would whisper to his Baptist friend the meaning of the many rituals which take place at Mass.

The next Sunday they visited the Baptist Church. Soon after the preliminaries had taken place, the Baptist preacher approached the podium and took off his wrist watch and placed it on the ledge of the pulpit.  Immediately the Catholic kid leaned over to his Baptist friend and said, “What does that mean?” The Baptist kid replied, “It don’t mean a thing!”

The Jon Appleton style was like the music of Bing Crosby and Frank Sinatra (both Catholics, by the way) – easy listening. There were salient points and insightful commentary in the makeup of his sermons. He had as much distaste for fire and brimstone rhetoric as the editor of the New York Times. He was uncomfortable with the far right Christian movement, but he was very much in step with the principles of the Golden Rule and believed that we all are our brother’s keeper. He was also keen on Crimson prevailing in the annual Iron Bowl.

Jon Appleton could be unconventional. For example, if a Sunday School teacher at his church address wanted to allow a discussion of evolution, Jon would not have called for him to be sacked or to have his head served on a platter. He believed healthy dissent had its place at church.

He was particularly accomplished at creative eulogies. He had a nice touch for remembering the departed for something that had set him/her  apart, bringing about generous laugher in a sanctuary where grief usually holds sway.

Nobody was ever better from the pulpit when it came time to bringing  about a sendoff cloaked in humor and insightfulness that left family and friends with feel good emotions at a forgettable point in their lives.

When it came time last week for his friends to gather for Jon Appleton’s final service, I, as we all do at solemn and regrettable times, thought of how I will remember this warm and delightful friend. It will be his sense of humor, his sly smile and his poignant cynicism. You saw him coming and you felt good. When one of his flock needed comforting, he was always there. He was a good man and a good minister. Lest we forget, he was seasoned at good naturedly applying the needle. What set him apart – he was never offended when you reciprocated.

A story to which he always gave his grinning approval had to do with a dinner when I sat by him at the head table, for a roast of the late Upshaw Bentley, one-time mayor of Athens. As the meal was getting underway, I told Jon that I needed a glass of wine and offered to bring him a glass, too.  He simply winked.

Later, when he turned 60, I had an opportunity to use the following story which had been incubating for some time. Enumerating a gaggle of places I had visited, real or imagined, I outlined them succinctly and closed with this wisecrack. “The greatest thrill I have ever had in my life was buying a Baptist preacher a drink.” Somewhere his patented grin is flashing.

Loran Smith is an athletic administrator at the University of Georgia.

HUNT COLUMN: AP does not stand for all pupils

TURES: Did a person or a computer write this column?