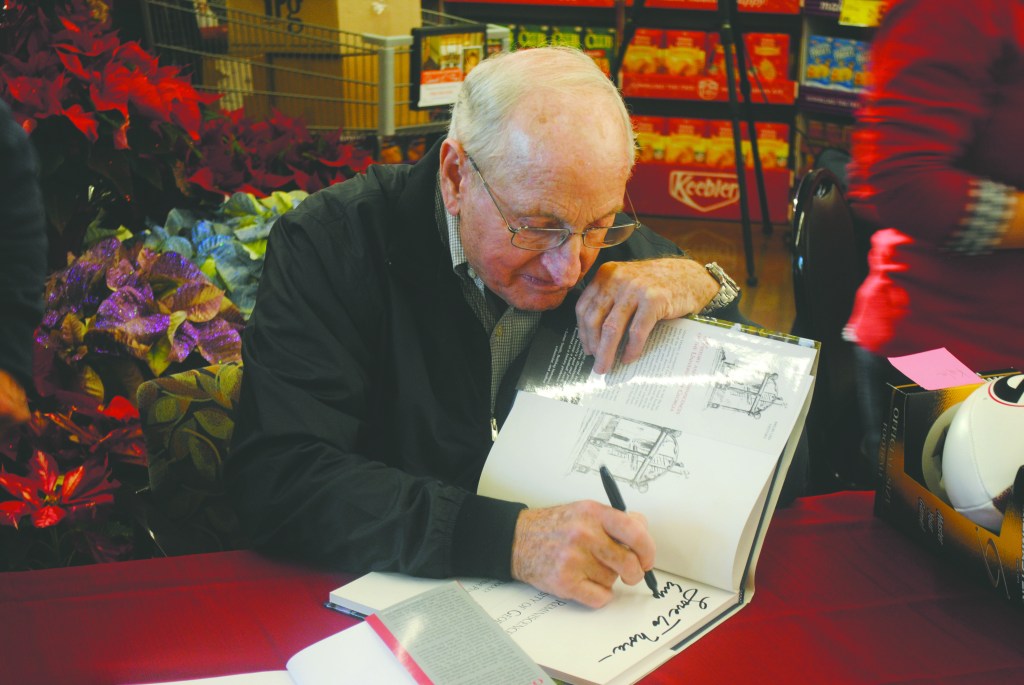 Former University of Georgia head football coach Vince Dooley signs a copy of one of his books at a signing at Kroger in LaGrange. (James Simpson II | LaGrange Daily News)

Dooley is currently on tour throughout Georgia this month to sign copies of his books and any collegiate memorabilia that people might have. LaGrange was the stop Thursday when he visited Kroger at 203 Commerce Ave.

During his tenure at the University of Georgia from 1964-1988, Dooley compiled an impressive 201-77-10 record, won six SEC championships and led Georgia to its first and only national championship in 1980. During Dooley’s post-coaching career, he has spent a vast majority of his time writing books.

Dooley has written and published nine books so far: seven adult books (Dooley: My 40 Years at Georgia, History and Reminiscences of the University of Georgia, In Dooleys Garden, Dooley’s Dawgs, Southern Fried Football: The History, Passion, and Glory of the Great Southern Game, Always a Bulldog: Players, Coaches, and Fans Share their Passion for Georgia Football, What It Means to Be a Bulldog) and two children’s books (How ‘bout Them Dawgs and Hairy Dawg’s Journey Through the Peach State!).

“I think I developed an interest in writing books when I majored in business and then went back to school to get a master’s degree in history,” said Dooley. “I did a lot of research for papers and I was used to going into the library to research all the time. I think it came from that more than anything. I just enjoy learning, researching and writing. It gives you a satisfaction.”

The five-time SEC Coach of the Year said he also has a new book coming out next spring that centers around the Civil War titled “Legion’s Fighting Bulldog,” which he says involves a Confederate colonel in Cobb’s Legion who had the courage of a bulldog.

“The central message I hope people get from my books is that they enjoy the variety of books I’ve written,” said Dooley. “I have people who come up to me and have questions about the garden book I wrote. I have a mixture of things I’ve written that I hope they like.”

As an author of nine books, Dooley says he highly enjoys traveling and getting the opportunity to talk to fans about not just his coaching career but about the books he’s written, too.

“I enjoy these book signings. Getting around and visiting places where I use to recruit at. I like traveling and seeing people,” said the 1994 College Football Hall of Fame Inductee.

After discussing his books, the conversation shifted towards his football coaching career.

Panthers roll it up on Vikings in home win