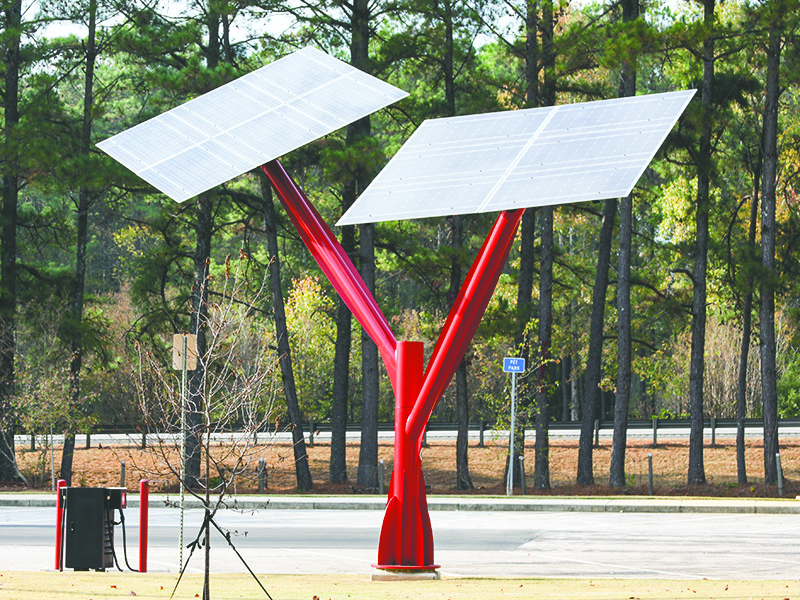 A solar powered charging station was installed earlier this year at the West Point Welcome Center as part of the Ray project, named after Ray C. Anderson of Interface. (Photo by Alicia B. Hill | LaGrange Daily News)

LaGRANGE – LaGrange City Council discussed future plans for the section of I-85 known as the Ray with state officials on Tuesday to ensure continued support and understanding on the project that they hope will beautify the entrances to the city and county from the interstate.

Gov. Nathan Deal designated a section of I-85 as the Ray in 2014 in honor of Interface founder Ray C. Anderson who worked for a better future for his community throughout his life. Plans for the Ray include landscaping, better roads, solar panels and a variety of features to encourage fuel efficiency at the West Point Welcome Center, like tire pressure monitors.

“The Ray goes on I-85 from the entrance point to Georgia to exit 18,” said City Manager Meg Kelsey who described some of the new technologies that are planned for the Ray. “… They are focused on safety and aesthetics, and that is why they look at tire pressure. (It is important) not only in terms of aesthetics but in emissions.”

One of the major parts of the proposed project is the use of crumb rubber asphalt on the road, which would use recycled tires to make the highway safer and quieter. This part of the plan took on a special relevance with Sentury Tire’s announcement of plans to open a factory in LaGrange and begin production in the city in 2018.

“The recycled tires honestly take on even more of a significance as now we’re going to be making tires here,” said Mayor Jim Thornton. “It would be nice to find reuses for those tires. … There has been some resistance from some of the contractors and even the DOT.”

“This is a win, win,” said Nix. “Scrap tires are a huge problem. Being able to get these and put them in something that is worthwhile? … That’s why the Ray wants to do it. They want it to be a model project of how you can do the best good with everything.”

The city is interested in the new asphalt for more than just recycling, though. They also hope that the crumb rubber will make areas near highways a quieter, more peaceful place to live near, too.

“We thought particularly that it would make sense on the Vernon Woods Connector if that is going to be mostly residential area over time because of the sound dampening (quality of the road),” said Thornton. “It’s not just a recycling thing, but it also reduces significantly sound (pollution).”

Similar roads in California and Arizona were shown to have positive effects on noise pollution. According to studies, the crumb rubber asphalt would hold up just as well or better compared to normal asphalt, and it would not require resurfacing as frequently as regular asphalt, making it one of many parts of the Ray that city officials would like to see work out.

“(The Ray C. Anderson Foundation people) obviously are trying to do things here that are innovative and creative from an environmental stand point, and I think there is a good opportunity for this to become a destination for people around the country – maybe around the world – who are looking at seeing how technologies like this can actually be deployed, and how do you actually drive over solar cells,” said Thornton. “Well, you’ll be able to drive over solar cells at West Point Visitor Center when this is completed. That’s a pretty exciting thing when you think about energy (in the) future.”

The ribbon cutting and designation for the new Wattway road and WheelRight is Tuesday at 2 p.m. at the Georgia Welcome Center in West Point.