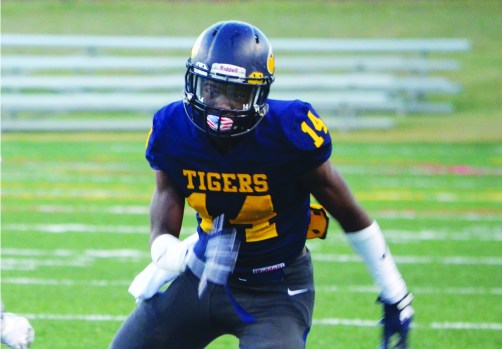 LAGRANGE – Troup’s Kobe Hudson is getting a chance to test his skills against some of the best high-school football players in the country.

Hudson, who is coming off a phenomenal freshman season for the Tigers, has been selected to play in the Freshman FBU All-American Bowl.

Only 60 players from across the country will participate in the game that will be played on Jan. 6 at the Alamodome in San Antonio.

The game is being played in conjunction with the U.S. Army All-American Game that will be played on Jan.  7, also in the Alamodome.

It’s a game that in the past has included players that have gone onto do great things on the collegiate level.

Hudson was a marvel for a Troup team that had one of the state’s best turnarounds.

The Tigers went 1-9 in 2015, but they posted an 8-3 record last season and finished second in Region 5-AAAA to earn the right to host a home playoff game.

Hudson was the favorite target for junior quarterback Montez Crowe.

Hudson had more than 20 catches, while averaging better than 26 yards per reception, and he had nine of the 16 scoring passes that Crowe threw.

Hudson was also a defensive back, and he returned an interception for a touchdown during a critical regular-season win over Sandy Creek.

Three other Troup players, meanwhile, have been selected to play in the Florida vs. Georgia All-Star game that will be held in Delray Beach, Fla. On Dec. 31 at 5 p.m.

Running back Camren Russell, along with wide receivers and defensive backs Ken Truitt and Chanse Hill, will represent Troup in the game.

Russell, Truitt and Hill were seniors on the Troup team that made the drastic turnaround last season.

Russell ran for more than 700 yards and averaged nearly six yards per carry with 11 touchdowns.

Truitt and Hill were both two-way starters who had successful senior seasons.