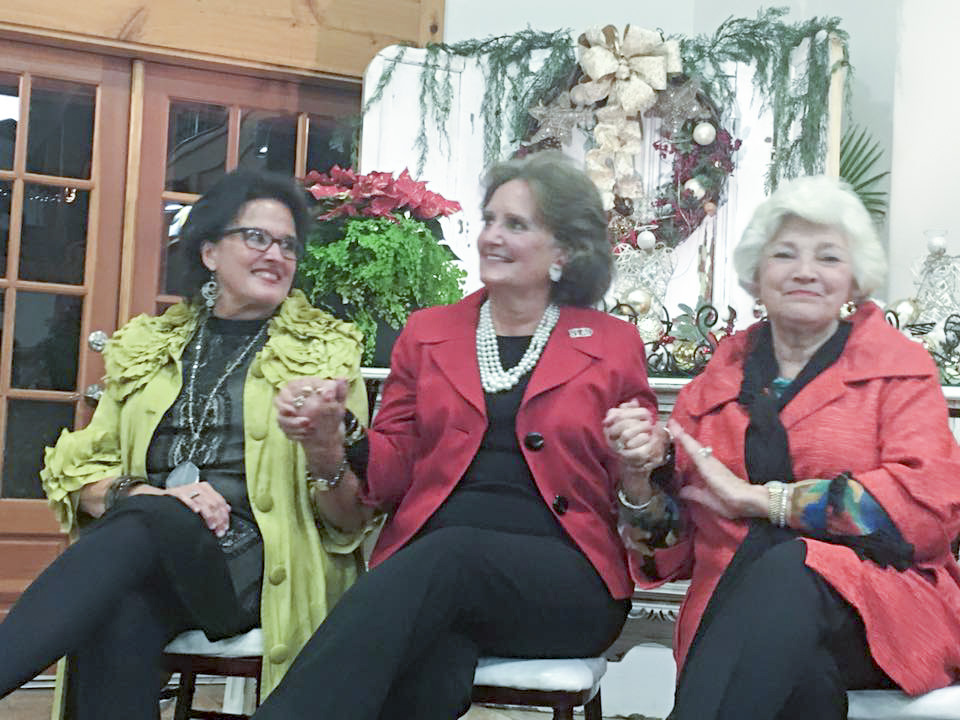 Troup County School Board members Sheila Rowe, Debbie Burdette and Dianne Matthews hold hands during a reception in their honor in LaGrange last week. The three women, longtime board members, all chose not to run for reelection this year. Thursday was their last school board meeting. (Submitted Photo)

LaGRANGE – A combined 56 years of school board experience will officially end this month.

Debbie Burdette, Dianne Matthews and Sheila Rowe all saw the gavel drop at their last official meeting Thursday. All three chose not to seek reelection this year.

Each had their own motivation and circumstances for getting started.

“I was involved in the school system when my kids were in school and there was an opportunity to run for a position on board. I was encouraged to run and I ran to make a difference in Troup County,” said Burdette.

“I used to teach and I did long-term subbing at girls junior high, boys junior high and at LaGrange High. The district that I was teaching in moved and people encouraged me to run for the school board and I then considered running,” said Matthews.

Each of the three women also has her own greatest accomplishment.

“Of course the children,” said Rowe. “Just to see them excel and succeed at different things is important.”

Rowe said in 1997, the Troup County school district got its first E-SPLOST, a sales tax to fund education infrastructure that hadn’t been available in Georgia up until then. The school system is currently on its fifth tax and has been able to upgrade many facilities with the money that wouldn’t have otherwise been accessible.

“We were able to fund and purchase new facilities, new buildings and new schools in Troup County,” said Matthews. “We would not be able to do that if not for the E-SPLOST.”

Matthews showed her appreciation for the teachers, too.

“I very proud of our teachers. They helped increase the students’ scores during testing and we are grateful to have them,” said Matthews.

Troup County’s school board went through a difficult time during the economic recession in 2008 and 2009 where they had to reluctantly layoff teachers, get rid of special programs like art and music full-time due to budget cuts, give teachers furlough days and over time, shut down four schools. After the schools were closed, the board set out to build and open three new schools: Callaway Elementary, Franklin Forest Elementary and a completely new Ethel W. Kight Elementary – while also making new additions to other schools in Troup County.

“Those were tough decisions we had to make but we made them with our head, instead of our heart,” said Burdette.

“Handling the finances can be challenging,” said Matthews. “But right now we are in good shape leaving the board.”

Each of the women expressed a sense of pride for what they have accomplished.

“We kept ourselves above water. We got through those hard decisions and because we made them we are in a good financial state right now,” said Burdette. “I want us to be remembered that our number one priority was the children and our agenda was to give the children the most opportunities to succeed.”

“I’m encouraged by the two new reading programs in the elementary schools we started for students that are struggling with reading,” said Matthews.

“I want people to think of us leaving the school board in good shape for the future,” said Rowe.

All three women, born and raised in Troup County, said they’d miss it.

“It’s very bittersweet,” said Rowe. “When I think back, I’ve been doing this for a quarter of a century. It’s just been a big part of my life. But I will be here to help out any way possible.”

“I will definitely miss the people and children,” said Matthews.

“I will still be involved,” said Burdette. “I’m involved in the literacy program and I will continue to support through the program.”

Burdette, better known to most children as “Mama Jama, the storytelling mama,” has assured children and adults alike she plans to continue in that role and stay involved in local literacy efforts.

The women say the experience has been an education for them, while they worked on education issues in Troup County.

“When I first started, I said I don’t know a thing about education,” said Rowe. “The (former) Troup County Assistant Superintendent Joyce Morgan once told me, ‘Always do what’s best for the children’ and I slept good at night knowing that I did just that.”