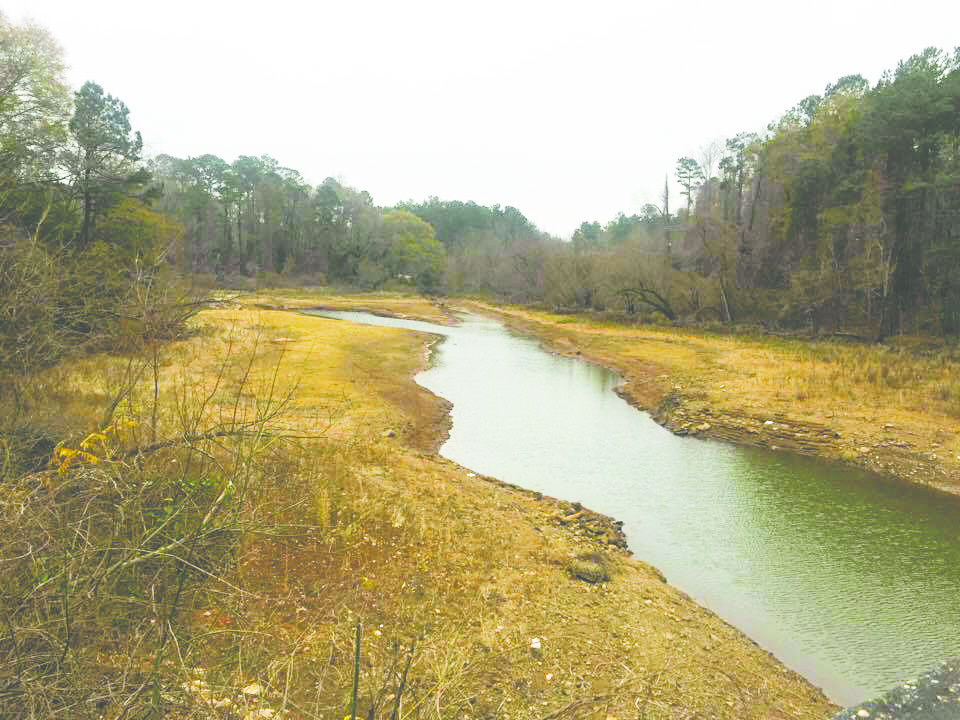 West Point Lake was at 628 feet on Monday - its winter pool - but that means little to dock owners who have this view when the lake is low. By Jennifer Shrader | Daily News

LaGrange and Troup County did not get all they wanted for Christmas in the latest – and presumed final – draft of the water control plan, released last week.

The plan, which has been in the works for more than four years, mandates how the Chattahoochee River basin is operated, including West Point Lake. Local lake watchers had hoped the plan – last revised in 1989 – would include a change raising the lake’s winter pool to 632 feet above mean sea level. The current level the U.S. Army Corps of Engineers draws the lake down to in winter is 628 feet.

The corps manages the lake, as well as others in the basin, and is responsible for updating the water control manuals in the midst of the decades-long Water Wars between Georgia, Florida and Alabama.

“While we are disappointed that a change to the winter pool rule curve was not included in the water control manual, we remain steadfast in our commitment to the issue and will not give up,” said Page Estes, president of the The LaGrange-Troup County Chamber of Commerce. The chamber sponsors the West Point Lake Advisory Committee, which helps advocate for the lake.

The chamber is coordinating a joint response with the mayors of Hogansville (Bill Stankiewicz), West Point (Steve Trammell) and LaGrange (Jim Thornton) and County Commission Chairman Patrick Crews during the open comment period to the USACE. In addition, a joint letter will be issued to Gov. Nathan Deal urging him to continue to support the recommendations of the ACF Stakeholders and state EPD’s Georgia Contemplation during his negotiations with Alabama and Florida, both of which include the rule curve change.

Stakeholders from all three states involved in the water wars have been meeting for the last several years and came up with a compromise plan for water resources that Troup County Engineer James Emery called a “landmark” in negotiations. The stakeholders hope it would be included in the corps’ plan. It wasn’t. Georgia’s Environmental Protection Division has come up with a plan West Point Lake watchers support – called the Georgia contemplation – the state hoped would be included in the corps’ plan. It was not.

In the meantime, the governors of all three states have been meeting privately to try and resolve the water issues and the supreme court could rule on the water issue as soon as the end of this month after hearing arguments via a special judge in Maine. Emery said if the governors or the Supreme Court issued a statement, the corps could be forced to listen.

“Congress has said the three governors need to work this out,” he said.

Meanwhile, the clock ticks on the public comment period. Local lake supporters have until Jan. 14 to provide the last comments on the water control plan before it takes effect.

“A court ruling is expected by mid-January, and the governors could certainly reach an agreement prior to the date,” said Estes. “That’s why we must make sure the interests of our community and West Point Lake are kept in consideration.”

Troup County Engineer James Emery said he wasn’t surprised the corps didn’t include the change in its final draft, even though lake watchers have been asking to raise the winter pool since water control plan talks began.

“The corps has said it’s not in their scope (to change the winter pool),” he said. “We believe it is.”

The corps said it can’t raise winter pool without the information from the environmental modeling, which was funded by the stakeholder groups at a cost of $1.5 million. It’s now tied up in a lawsuit between Georgia and Florida, however, and can’t be released.

“We believe the corps could do its own modeling,” Emery said. “:They could come up with this data themselves.”

With the release of the water control plan, a potential ruling by the Supreme Court and negotiations with the governors likely coming to a close, it doesn’t necessarily mean the end of the water wars.