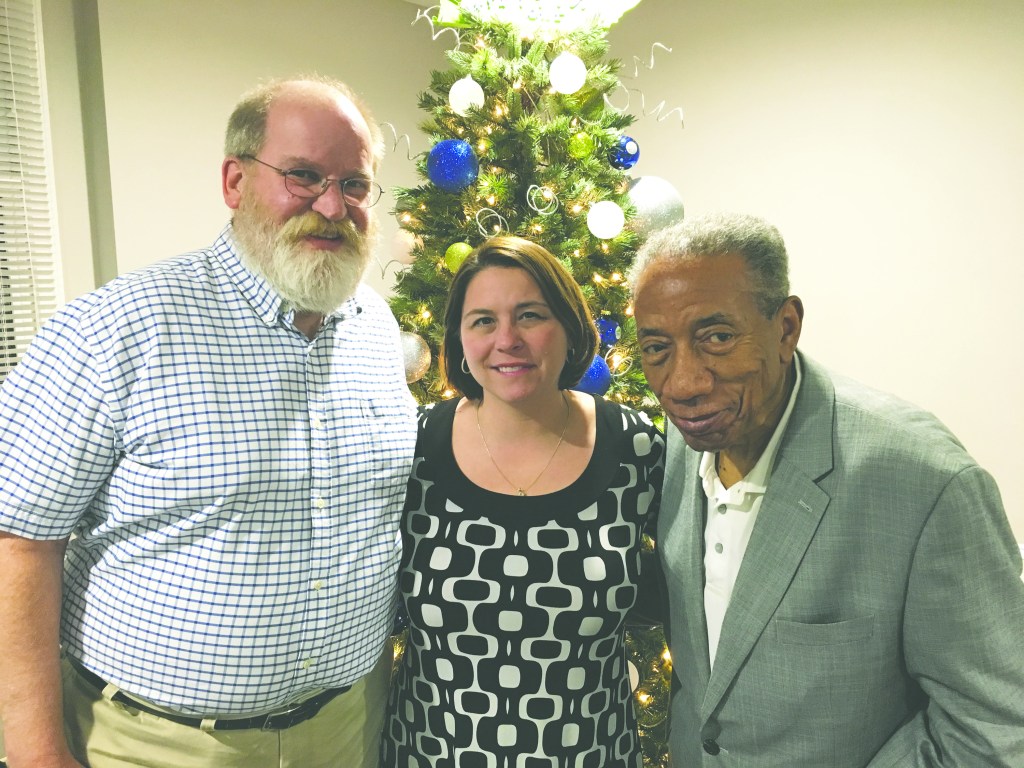 From left are outgoing Franklin County (Ky.) Board of Education members Doug Crowe, Michelle New and William Cofield. Cofield is a LaGrange native.

FRANKFORT, KY – After 25 years on the Franklin County Board of Education, William Cofield is retiring. Cofield was the first African-American to serve on the board when he was appointed in 1991.
The 77-year-old, who has served on the school board ever since, decided not to seek re-election this year. In addition to service on the school board, Cofield has held leadership roles in the NAACP at the local, state and national levels, and he was inducted into the Kentucky Commission on Human Rights Hall of Fame for his work.
Born in 1939 in LaGrange, Cofield’s education was in education.
He studied at Fort Valley State University in Georgia and Tuskegee University in Alabama, as well as doing graduate work at Ohio State University.
“Where I’m from in Georgia, you either went into teaching or you went in social studies,” he said. “Some of our graduates went on to med (medical) school — a very few.”
Cofield came to Frankfort in 1973 to join the education faculty at  Kentucky State University.
“I was a graduate student at the Ohio State University, and I was in Chicago at a conference and I met the chair of the education department at Kentucky State. He had an opening there in higher education and asked me to apply for it,” he said. “So, I did and of course I was successful in getting the job and I haven’t looked back.”
Since coming to Kentucky, Cofield has been a local, state and national leader. From serving on the NAACP national board of directors for 30 years to hosting Know Your Community on Channel 10 to spending 25 years on the Franklin County School Board, Cofield’s face and leadership have been constant.
After his school board appointment, Cofield continued to serve for many terms, running unopposed for re-election throughout.

“So, when I ran, apparently, people in my district saw something in me that allowed them to support me without opposition,” he said.
Cofield said he would have run for another term in November, but he chose not to due to a health issue.
Fellow longtime board member Doug Crowe said Cofield brought something important to a group that deals with difficult decisions.
“Mr. Cofield’s always been a calming and steadying influence on the board,” Crowe said. “He’s passionate about what he does, but he always has a calm and cool demeanor. A lot of times that’s exactly what a board or a committee or a group of people working together (needs). Sometimes you have to have that individual that just makes you slow down and look at everything.”
Cofield’s voice of reason will be his legacy on the board, Crowe said. The board will also be missing Cofield’s institutional knowledge.
“It’s going to be hard to fill. Nobody can actually fill Bill’s shoes. He’s a unique individual all the way around,” Crowe said.
When asked about the biggest changes he’s seen over the years, Cofield said he is happy about positive trends, such as keeping the district’s facilities updated and the academic achievement of students like Tamara Rudic, who recently scored a perfect 36 on the ACT.
“When you have that going, that’s a good thing and you like to see more of it,” he said.

Both an accomplishment of the board and something that has kept Cofield excited over the years has been finding and supporting leaders in all levels of the district’s staff and administration.
“The fact that we were able to get strong leadership in the district — the superintendent and teachers — that helped to keep you going, too, motivated,” he said. “I think it all starts with leadership, and we’ve had exceptional leadership in this district since I’ve been a part of it.”
Cofield also experienced Franklin County schools as a parent. Both of his children went through the county school system and spent time at Kentucky State University. He was pleased with the education they received.

And he feels good about the future of the school system.
“The school district … has grown and is continuing to grow with the people that we have hired now. I think they all love children and are working toward that end — to make them the best that they can be,” he said.
In addition to serving on the school board, Cofield served as president of the National Caucus of Black School Board Members in 2004.
From 1985 to 2013, he served as president of the Kentucky NAACP. In 1986, he became a member of the National NAACP Board of Directors. Locally, he has been chair of the Frankfort-Franklin County NAACP and has been an adviser for the NAACP Youth Chapter at Kentucky State University.
In 2014 he was inducted into the Kentucky Commission on Human Rights Hall of Fame. Nominees and inductees “are men and women who have made significant contributions to Kentucky’s progress in the areas of civil and human rights.”

He was honored by the hall of fame induction because, through his leadership roles, Cofield worked to promote equal rights in housing, employment and public accommodations; to promote voter registration and suffrage for felons; to honor civil rights leaders; and to play a role in growing NAACP membership and outreach.
Cofield was also recognized by former Kentucky Gov. Wallace Wilkinson and the national NAACP for his work.
Crowe said Cofield is just a good person to be around. His compassion for people, demonstrated through his work for kids and through the NAACP, as well as his strong faith and family, are evident.
“He walks the walk: caring about your fellow man,” Crowe said.
Cofield said he has enjoyed the service to the community and children that his time on the board has given him.
“I’m a teacher by training. I had a wonderful experience, being that I served at each level — preschool to college. And I think the fact that I had that experience,” he said. “I enjoyed it tremendously: serving the community and the young folks.”