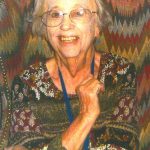 Emmy Anthony Massey, age 85, passed on to her heavenly home on Saturday, December 17, 2016 at Signature Nursing Home in Bowling Green, KY. Emmy was born in Columbus, GA on January 27, 1931 to Will and Velma (Tharp) Anthony. The family relocated to LaGrange, GA in 1956. Emmy was married to Mark T. Massey in 1962 until Mark’s death in 1984. She was a faithful member of Oakside Baptist Church since 1970. Emmy was a wonderful cook, but one of her favorite activities was eating out at Red Lobster. She had a great sense of humor and a quick wit. Emmy moved to Morningside Assisted Living in Bowling Green, KY in October of 2012 to be near her niece, Karen, and her nephew-in-law, Joe. She enjoyed her life at Morningside participating in bingo, choir, and Sunday church services.  Last December her health declined drastically, and Emmy moved to Signature Nursing Home. She is survived by her sister, Lillian (Wartan) Jemian of Auburn, AL, and her niece, Karen (Joe) Morgan of Bowling Green, KY. Funeral service will be held on Friday, December 23, 2016 at 2:00 pm at the Higgins LaGrange Chapel, 100 Corporate Plaza Drive, LaGrange, GA with Rev. S.T. Janney officiating.  Burial will follow at Shadowlawn Cemetery in LaGrange.  The family will receive friends beginning at 1:00 pm before the service. In lieu of flowers, donations may be made in Emmy’s name to Oakside Baptist Church, 1921 Hamilton Road, LaGrange, GA 30241. Online condolences may be sent to the family at our website, higginsfuneralhomes.com. Higgins LaGrange Chapel, (706) 884-7117.