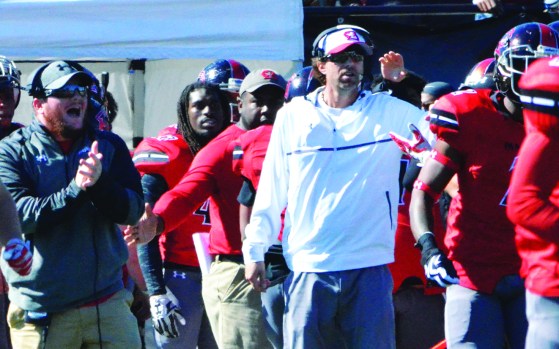 LaGrange College's Matt Mumme is leaving to become the offensive coordinator at Nevada.

LAGRANGE – When the LaGrange College Panthers open a new football season next fall, they’ll have a different person calling the shots.

Matt Mumme, who had been at LaGrange College since 2013, is leaving to become the offensive coordinator at the University of Nevada.

Last week, Nevada hired Jay Norvell as its head coach, and during his introductory press conference, he said he would run a fast-paced, pass-oriented offense.

It didn’t take Norvell long to find the person he wanted to be in charge of that offense.

Mumme, who came to LaGrange College as the offensive coordinator in 2013 before becoming the head coach late in the season, is Norvell’s man.

Speculation began last week when Mumme was spotted on the Nevada campus, and the coach made it official when he made the announcement on Twitter on Sunday.

Mumme, son of long-time coach and offensive guru Hal Mumme, is heading to Reno to be Nevada’s offensive coordinator.

“Fayedra and I have been truly blessed to be a part of such a wonderful school here at LaGrange College,” Mumme said. “I was very honored to be the head football coach here and want to give special thanks to Dr. (Dan) McAlexander for giving me this opportunity,” Mumme said. “I would be amiss if I didn’t also thank (athletic director) Jennifer Claybrook, all of my staff and of course all the players who have given their commitment to make this program grow.”

Mumme joined the LaGrange College staff for the 2013 season as the offensive coordinator under Todd Mooney, who had been the head coach since the program began in 2006.

Mooney stepped down late in the 2013 season, and Mumme took over as head coach with three games remaining.

In his three-plus seasons as head coach, the Panthers were 12-20.

A hallmark of Mumme’s teams was an ability to put up big numbers on offense, particularly in the passing game, first with Graham Craig at quarterback, and then with Connor Blair at the helm.

This season, Blair averaged 361 passing yards per game, and he threw 35 touchdown passes.

In another staple of Mumme’s offenses, Blair spread the ball all over the field, with 12 different players catching at least 10 passes, and he threw touchdown passes to 11 receivers.

In the final game of the season, Blair set school records for touchdowns in a season and a career (57).

Blair also set the record for passing yards in a season with 3,616.

Mumme graduated from the University of Kentucky in 1999, and he was a quarterback for his father Hal Mumme.

Now for just the second time in school history, LaGrange College is searching for a new head coach.

Mooney was brought in to help begin the program, and he was the head coach for seven-plus seasons, and he guided the Panthers to their lone conference championship in 2008 when they reached the NCAA Division III playoffs.

When Mooney resigned in 2013, Mumme was promoted to head coach, and there was no need for a search.

Claybrook said the search will begin right away.

“With a strong recruiting base available and the excellent football facilities we have here at LaGrange College, we can expect to bring in a talented head coach to further the advancement of the Panther football program,” she said.

Claybrook said she wishes the best for Mumme.

“We at LaGrange College wish Matt the best in his new position and want to thank him for his efforts as our head football coach over the past three years,” Claybrook said. “The foundation has been laid for a successful program with the talented players we have returning and strong prospects for the incoming class of 2017.”

It’s a big step for Mumme, who will get the chance to run an offense for a program playing at the highest level of college football.

His new head coach said it will be an offense that will be fun to watch.