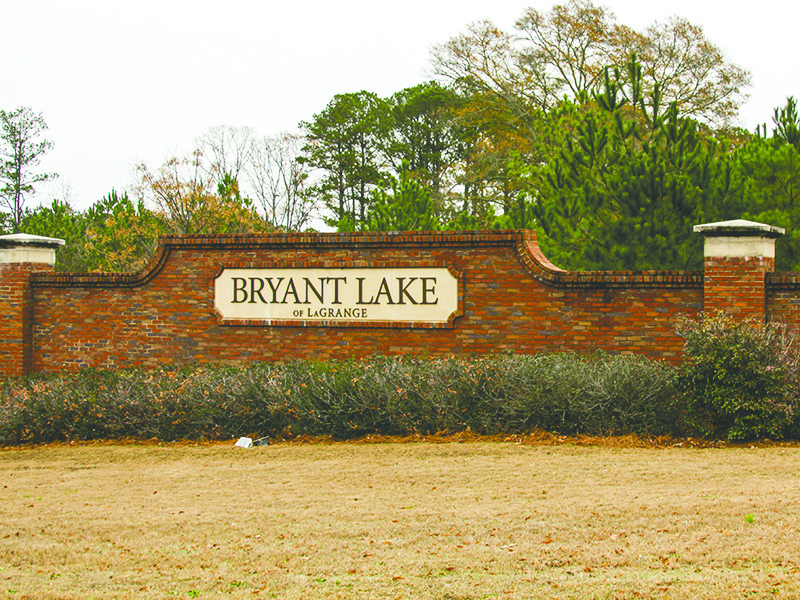 The proposed LED media sign would be located between the entrance to Bryant Lake and a private home. (Photo by Alicia B. Hill | LaGrange Daily News)

LaGRANGE – The Troup County Commission discussed a LED media sign that a developer hopes to install on a half-acre parcel on Hamilton Road near the entrance to the Bryant Lake subdivision.

The sign would run ads 24 hours a day and automatically dim at dusk, according to the conditional use application. Because of the sign’s location, residents of Bryant Lake voiced concerns about how close the sign would be to the entrance to their subdivision and possible effects on property values.

“Bryant Lake is definitely in its infancy – not so far as the years are concerned – but in 2008 they went through some financial issues … and that has never really left the residents,” said Ronald Staffor, a resident of the subdivision. “… Property value there in Bryant Lake – we are in anticipation that – it will never unfold (and go up).”

The board of zoning recommended denial of the billboard but did provide a set of conditions for the zoning if it was approved. Those conditions still left certain concerns of residents of the area unaddressed.

“The location of where they indicated… the digital billboard – 30 foot – would be, there is no mistaking it’s immediately behind – based on any angle coming from town, going out of town – it’s going to be behind the Bryant Lake sign,” said Ken Pearson, another resident of the subdivision. “So, it’s going to feel (like) a part of Bryant Lake. … Based on my research (when I moved in), I wasn’t going to have a 30-foot billboard in the city. They are prohibited.”

The location of the sign would be on a section of county land surrounded by land that is part of the city of LaGrange. The location is significant because while LED media signs are allowed within the county, they are prohibited in the city, so the sign could raise problems if the land is later annexed to the city. The property owner hopes that the county will seriously consider allowing the sign.

“I think we should be allowed to earn some revenue on it,” said Ken Regan, the property owner. “There’s not much else that you can do with a half-acre lot. It’s zoned commercial, and everything around it is commercial. The people down there in the subdivision down there is seven-tenths of a mile to the first house down there, so there is no way they can see it.”

The billboard would be similar to the billboard posted by Dudley’s Outdoors on West Point Road, though in this case the billboard would be taking advantage of a variance granted in a November zoning board meeting that would allow for a difference to the usual requirement that a billboard of this type be at least 1000 foot from any homes. Some locals are more optimistic about the sign though.

“I went last night in reference to our subject and looked at the sign on West Point… and I didn’t think it was too big,” said Raymond Jabaley Jr. of South Lewis Street, who wants to advertise on the sign. “I didn’t think it shed too much light. I actually thought it was pretty attractive, and it would give plenty of businesses – including even Bryant Lake, if they wanted to advertise on that sign – the opportunity… I think that that multi-use sign would be more attractive than a static billboard.”

The sign would be required to be the same size as the sign on West Point Road which is 12 foot by 24 foot and 30 feet high.

“That 12 by 24 by 30 would look more like a digital sign then a billboard,” said Senior Building Official Jay Anderson. “It’s not quite as high, and it’s not quite as big as some of the others. … (And it is a condition that) we would minimize tree removal.”

The city has not taken an official stance on the sign at this time, but Senior Planner Leigh Threadgill did note in a letter provided to the commission that the sign would be afoul of the city’s ordinances and future plans for the road.

If the sign was approved by the county commission, the Georgia Department of Transportation would have to approve the construction of the sign as well because of its location next to a state highway. The Troup County Commission is next scheduled to discuss the sign again at its next meeting on Jan. 3 at 9 a.m. at 100 Ridley Ave.

The road to the future