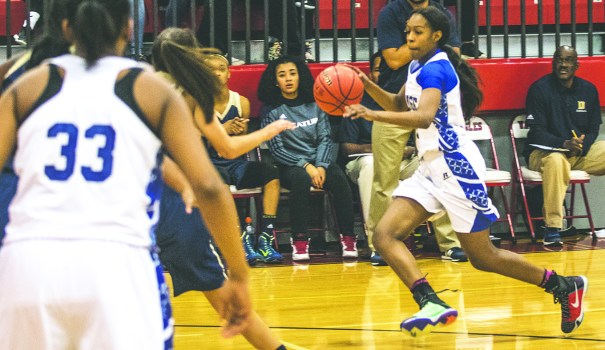 COLLEGE PARK – It was a tough assignment for the LaGrange Lady Grangers.

Holy Innocents’ won a state championship last season, and many of the players responsible for that success have returned.

On Tuesday, it was LaGrange taking on that outstanding Holy Innocents’ team on the final day of the Woodward Academy Classic.

LaGrange beat Decatur on Monday, but it fell to Holy Innocents’ 60-30 on Tuesday.

“The first quarter, we were right there in it,” LaGrange head coach Stephen Tuck said. “And the second quarter, we had turnovers, and missed shots. We couldn’t do anything offensively. I think we scored two points. They kind of ran away from us there.”

Tuck encouraged his players to come out and give a strong effort in the third quarter, and that’s what happened.

“When I went in to halftime, I talked to the team, and I said in a game like this, we want to see energy,” Tuck said. “I don’t care if we win or lose, it’s about getting better. We did some good things in the third quarter. I was happy to see that.”

Tuck said it was a positive experience for the players to go up against one of the state’s top teams.

“I think it was good, especially for my young girls,” Tuck said. “For the guards, being able to experience a press like that, and be able to work their way through the press and learn from it, will help us in the long run.”

LaGrange has lost one-sided games to Hillgrove and Holy Innocents’, but it was right there with a chance to win in the other five losses.

“We sat down and talked about it. We told them, other than this game and Hillgrove, all the other games we could have won,” Tuck said. “We were in those games. I tried to convey that to them, and get them to see how close they are to being a really good team.”