‘A little bit of hope’ 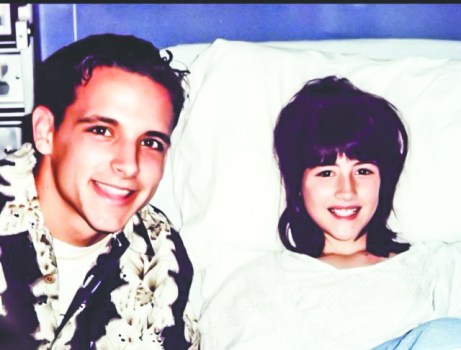 Josh Rhye, then 17, visits Amanda Power, then 11, in an Atlanta hospital in 1999 after she was diagnosed with Acute Myeloid Leukemia, a form of blood cancer. (Photo: Submitted) 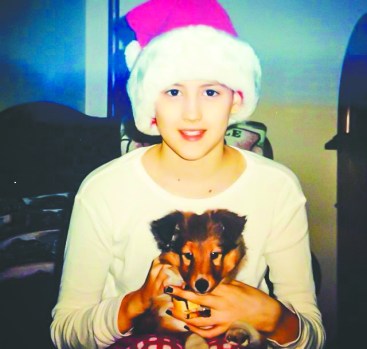 Amanda endured six rounds of intense chemotherapy in 1999 to combat an aggressive form of leukemia. The then 11-year-old girl was only given two weeks to live without treatment and almost succumbed to a fungal infection. She achieved remission and was allowed to go home for Christmas. (Photo: Submitted) 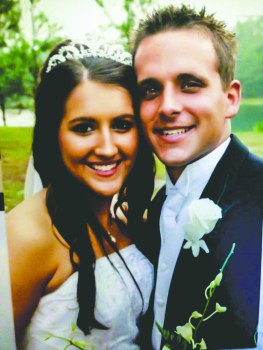 Amanda Power married her childhood sweetheart and best friend, Josh Rhye, on July 7, 2007. The couple lost touch for several years after Amanda’s battle with cancer. The two reconnected through Josh’s brother, Justin, on “Myspace” in 2006 and reunited on a beach in Hilton Head Island. (Photo: Submitted) 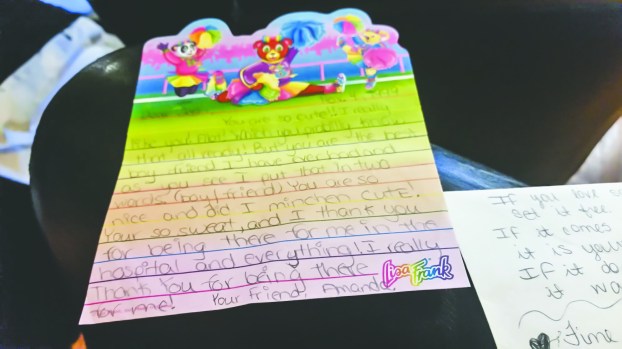 Amanda keeps all the letters she wrote to Josh while battling cancer in a commemorative scrap book. These notes were dated November, 1999 - just before her oncologists sent her home to say a final “goodbye” to family and friends. Amanda eventually beat the cancer and said her love for Josh and hope in their future together is what kept her alive. (Photo: Submitted)

‘A little bit of hope’

Amanda Rhye was only given weeks to live; years later marries childhood sweetheart

LaGRANGE – Christmas miracles can come in all shapes and sizes – and show up when you least expect it.

Amanda Rhye should not be alive to celebrate the holiday with her family on Sunday, according to oncologists and medical professionals in 1999.

The odds were severely stacked against her beating a deadly disease. The statistics were even more minute that she would ever marry her childhood sweetheart, Josh.

But the couple has never been the type to leave their fate to science – or to bet against their faith.

It was love at first sight for Amanda.

“I had the biggest crush on him,” Amanda said with a smile. “He always said hi to me and winked at me from the choir loft. I told my grandma that I was going to marry Josh one day … I had journals and notes that said, ‘Amanda loves Josh Rhye.’”

“I remember Miss Brenda, our choir director said, ‘She (Amanda) loves you. Don’t break her heart,” Josh remembered as he smiled at his wife. “… I loved the connection God gave us as family friends … and I knew God would move mountains for us to be together.”

But Josh was six years older than Amanda and at the time not quite ready to ‘settle down.’

The year was 1998, and Josh’s dad had just been diagnosed with a rare form of adult cancer called Acute Myeloid Leukemia, or AML. He was given only seven days to live.

Doctors sent him home to die, Josh said. His dad preached his own funeral before his family and friends, but continued to battle the deadly disease.

Amanda’s family prayed for Randy Rhye, his wife and five children – not knowing they would soon face a similar fight themselves.

In 1999, after three months of dealing with mysterious bruises, enlarged, painful lymph nodes and chronic fatigue, then 11-year-old Amanda was also diagnosed with Acute Myeloid Leukemia.

She and her family had just arrived in Texas for a two-week summer vacation when her parents got the news.

“We had just landed and got off the plane (in Texas) when my dad received a voicemail from a doctor telling him I needed to come back (to Atlanta) right away,” Amanda remembered. “I was diagnosed with Leukemia and in my case it was a very aggressive form of AML. It was already at stage four (of the disease).”

Doctors told Amanda’s parents recent blood work and a pathology report showed the cancer was so aggressive, if the 11-year-old did not start treatment right away she would most likely die in two weeks.

Amanda immediately began chemotherapy at Egleston Children’s Hospital in Atlanta (now Children’s Healthcare of Atlanta). The medical center was close to where Randy Rhye was still receiving his cancer treatment at Emory hospital.

As news of Amanda’s diagnosis spread among the community, Josh vowed to help his friend beat the deadly disease.

“Having gone through it with my dad, I knew how sick she was about to get and I just wanted to be there for her,” he said.

“Josh would come to the hospital and see me and just hold my ‘throw up’ bucket,” Amanda said with a smile. “He would be there during my spinal taps and bone marrow aspirations. He would just hold my hand, calm me down and tell me it would be okay.”

Josh proudly wore Amanda’s “Cancer Sucks” pin on his shirt and would paint her fingernails during those hospital visits.

Those visits abruptly stopped five months later when Amanda’s doctors discovered she had developed a severe fungal infection in her sinus cavity called Aspergillosis. Her body was weakened from multiple rounds of chemotherapy and simply could not fight off the infection, she said.

Surgeons operated on the 11-year-old girl to try and clear out the diseased tissue.

“The doctors told my dad they had only seen five people survive with severe Aspergillosis like I had,” Amanda said. “They (doctors) thought it (infection) would kill me before the leukemia did. The doctors gave my parents no hope.

“Right before Thanksgiving the doctors told my parents to take me home to Glennville … that it was a ‘goodbye visit,’” she continued. “They didn’t think I would make it through the next round

She almost did not survive.

While in Glennville, Amanda became extremely sick and needed to be rushed back to Egleston. Since it was the holidays and late at night, first responders and ambulances were in short supply, Amanda remembered.

A local doctor called in a favor to military staff at the Fort Stewart Army base in Hinesville. Soldiers flew Amanda swiftly back to Atlanta inside a Black Hawk helicopter, she said.

She celebrated her 12th birthday in the hospital and was released after her last chemotherapy treatment in January, 2001.

“Doctors said, ‘This is all we can do,’” Amanda explained. “So every month I would go back (Egleston) for a checkup to make sure there were no cancer cells in my body … then it turned into years … after five years, my doctors said the other ‘C’ word. They said I was cured … God just healed my body.”

Sadly, Amanda did not see or hear from Josh in the following years. Both their families had moved away from Georgia. Amanda graduated from high school; Josh was busy working with the Federal Emergency Management Agency after Hurricane Katrina.

But Amanda never forgot about Josh – nor the hope he gave her as she battled cancer.

In 2006, Amanda decided to look for Josh on the then popular social networking site “Myspace.” She did not find him, but did locate his brother Justin and sent him a message.

“Justin messaged me back and said, ‘Josh wants your phone number. Here is his number,’” Amanda remembered with a laugh.

“I called him, but he didn’t answer … the next day Josh called me. The first question he asked me was, ‘Do you have a boyfriend?’ I said, ‘Yes.’ And he said, ‘Well, I can take care of that,’” she said with a twinkle in her eye.

Amanda and Josh agreed to meet on Hilton Head Island, South Carolina for a “reunion” of sorts. But April 2, 2006 turned out to be much more than a quick social gathering, according to the couple.

“I was finally able to tell him how I felt and how he helped me all those years ago,” said Amanda. “It was my dream come true.”

“… When she got out of the car that day, with her hair blowing in the wind, I knew one hundred percent we were going to get married,” Josh said with a smile on his face. “We ended up talking and if it wouldn’t have been so odd to everyone else, we would’ve gotten married on the beach that day.”

Instead the couple waited more than a year and exchanged wedding vows on July 7, 2007 in Savannah.

“Amanda says our marriage is a dream come true, but for me, it is really a gift,” Josh said. “I didn’t see it coming, but when the time was right and she was standing in front of me, I knew we would be married too.”

According to Amanda’s doctors, the aggressive chemotherapy she received as a child severely limited her chances of ever becoming pregnant. Once again, she proved them wrong.

“Anything is possible,” she said. “Dreams do come true. I remember lying awake at night and I really believed I was going to marry Josh. Even throughout my sickness, I just had hope … all you need is a little bit of hope.”

The couple now harnesses that hope to inspire hundreds of people during services at ThreeLife Church on Hogansville Road, where Josh is the lead pastor.

“When God opens up to you, it’s like a treasure box,” Josh said. “When you see what he had planned for you, it will exceed anything you could have imagined or dreamed of … We don’t want people to get discouraged … because God can turn a page and make good things happen.”

“I believe we go through things to help other people,” explained Amanda.

The cancer survivor and mother of two is now using her experiences to ease the fears of children also battling the deadly disease.

She is in the process of writing a children’s book about a little girl named Hope and her fight against cancer.

“I just want to encourage people with ‘Hope.’ Not everyone will have a happy ending like I did, but I want them to have at least find a little bit of joy,” Amanda said. “God can answer prayer. He answered all of my prayers. I believe … so when people tell me things ‘can’t happen,’ I firmly say, ‘Yes, they can.’”

Amanda is living proof that Christmas miracles can come true.

But in case people do not believe her story, she is quick to pull out several scrap books.

Inside those albums, tucked among dozens of pictures of Amanda and Josh are those love letters she wrote to him many years ago.

Many answered prayers for a dying little girl who truly believed.