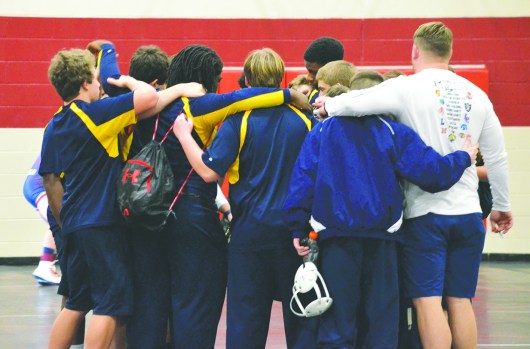 HOGANSVILLE – They’ve gotten plenty of mat time in this week.

By the time Thursday’s dual-format tournament at Callaway High wrapped up, some of Troup High’s wrestlers had been on the mat for a total of 15 matches in three days.

Earlier in the week, Troup’s wrestlers competed in 10 matches in two days in the Dariel Daniel Grind.

One day after that tournament wrapped up, Troup’s junior-varsity team was at  Callaway for another tournament that featured five more matches.

“Especially going up against varsity competition, I thought our guys held their own,” Troup coach Carson Dempsey said.

Dempsey said the effort and work the wrestlers have put in during practice is paying dividends.

“I’m super-proud of them,” Dempsey said. “I don’t know if there’s a way to describe the work they’ve put in. They’re finally starting to reap some of those awards, especially some of those football guys that don’t have a lot of experience. Like Kaliff Thornton, he won two matches today. I was so proud of him. He’s seeing the things he needs to do differently.”

Dempsey said his wrestlers have embraced the opportunity to go up against varsity wrestlers this week.

Troup won one match during the Dariel Grind and was competitive in a number of other matches, and it then won twice at Callaway.

The tournaments also serve as preparation in case any of the wrestlers are needed to fill out the varsity lineup.

That happened during the Dariel Daniel Grind when Trevor Upchurch was injured, leaving an opening at 120 pounds.

Freshman Mason Lumpkin stepped in and did well in place of Upchurch.

“We hated to have to use Trevor as an example, because that’s one of the toughest guys we have on the mat, but somebody’s got to step up,” Dempsey said. “We’re not just going to leave that weight class unfilled.”