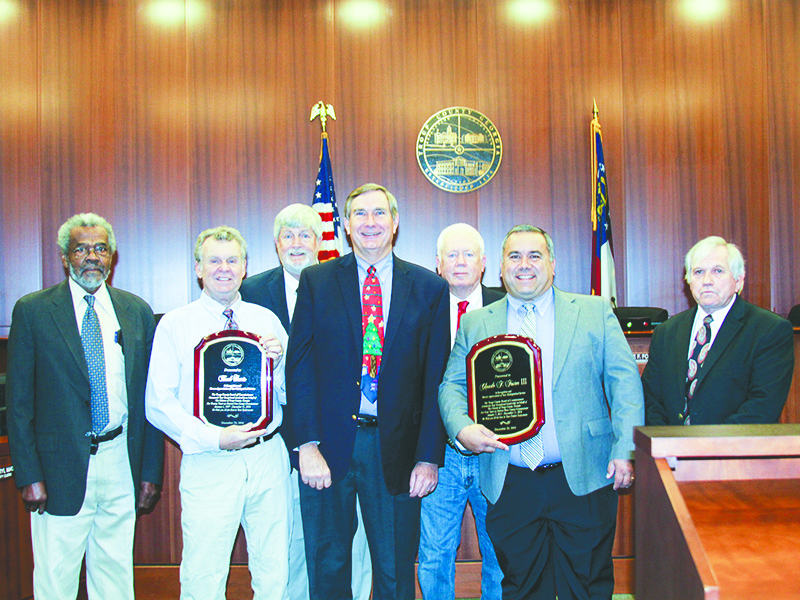 The Troup County Board of Commissioners recognized Buck Davis and Claude Foster for their service at the last commission meeting for both of their terms.

LaGRANGE – Commissioner Buck Davis served his last board meeting Tuesday after 20 years of service on the Troup County Board of Commissioners.

Davis has served on the board for years and has played an important role in the growth of the county.

“When I was elected on the board, I was 43 years old, and now I’m… an old man,” said Davis. “… It’s been a long journey, and now we’ve got (commission meetings) up here at the courthouse… but I appreciate the community. I appreciate them giving me a chance for 16 years.”

The meeting was also the last meeting for Commissioner Claude Foster who has served on the board for the last four years. He will be replaced by Lewis Davis, who defeated him in the Republican primary. Ellis Cadenhead will replace Buck Davis.

“Mr. Buck Davis has been serving for a long time, and so I know it is very special for him,” said Commission Chairman Patrick Crews. “… Only a very small part of our community ever have the opportunity to serve in these seats, and so for (Foster) and Buck and the work that they’ve done for the county – and I can certainly appreciate now having served here for two years, and I can appreciate what they’ve done. I know that they love Troup County, and we appreciate very much what y’all have done for us.”

Davis is a Troup County native, and he showed his appreciation for the commissioners and his friends who have supported him from his first election through the last meeting.

“I’m a 1972 graduate of Troup High, so I’ve had a lot of ups and downs through the years,” said Davis. “But I thank the Lord for granting me the time to share with (these) people and friends.”

Davis’ presence is sure to be missed, but his fellow commissioners were honored to have been able to serve with him on the county commission during this time of growth within the county, they said.

“Commissioner Davis has been here four years longer than I have, and I’ve been sitting next to him – I reckon’ –  since (2005),” said Commissioner Morris Jones. “… I want to thank him for his (20) years of service here in Troup County, and don’t let it be said that a LaGrange High graduate can’t sit next to a Troup High graduate and get along.”

The Troup County Board of Commissioners plans to swear in Davis and Cadenhead to the board on Wednesday at 100 Ridley Ave. at 10 a.m. The next commission meeting is scheduled for Tuesday, Jan. 3 at 9 a.m.