More updates expected for The Ray 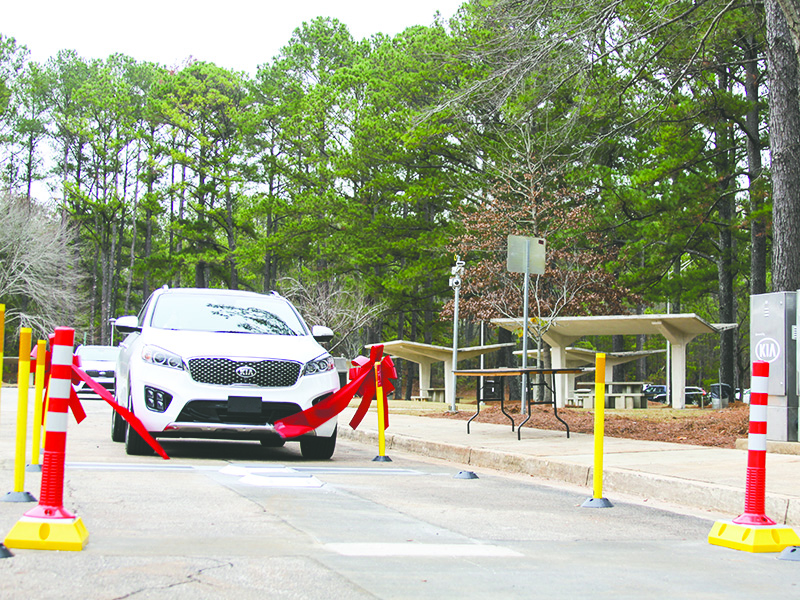 The first car drives through the WheelRight sensors at the unveiling ceremony at the West Point Visitor Center. (Photo by Alicia B. Hill | LaGrange Daily News)

WEST POINT – Last week, Georgia welcomed a series of revolutionary new technologies to the West Point Welcome Center as part of the Ray C. Anderson Foundation’s project to build a zero-emissions corridor from exit 2 to exit 18, and this week the Daily News takes a closer look at some of those technologies and how they could potentially change the way we think about highways.

The Ray C. Anderson Memorial Highway – often called the Ray – may become one of the safest, most beautiful and most fuel efficient sections of highway in the country if the foundation is able to put all of its proposed projects in place thanks to ideas ranging from solar panels to noise reducing crumb rubber concrete. Two of these ideas were unveiled last week at the same welcome center that has recently been revitalized by new landscaping, a solar-powered car charger and a butterfly garden that was planted back during the fall.

“We have actually planted a drought tolerant garden, so that it is actually in its native species, so that it has the biggest chance of success,” said Lisa Lilienthal.

The foundation hopes that the butterfly garden along with the other landscaping efforts along the highway will encourage a healthy bee and butterfly population, which is crucial to the future success of local crops because of the role they play in the life of plants through pollination.

“We are doing landscaping paid for by the Ray on exits 2 and 18 now,” said Allie Kelly. “We have (a project) that we are doing with DOT funds going in at exit 6 right now, and the pollinator garden is already in, so between now and mid-January all the beatification at (exits) 2, 18 and 6 will have happened. … We are finishing the year with a bang.”

This year will also be marked with motorists getting more bang for their buck thanks to the introduction of an advanced tire pressure monitoring system – and a provided air compressor– that also checks tread depth to improve driver safety.

“The tire pressure was the first development, but because it’s an integrated system,” said WheelRight’s Chief Executive John Catling. “You’ve got the recognition of the vehicle the collection of the data and the presentation of it, so those instruments there (on the machine) would also weigh the vehicle. We have weight and motion and to do tire temperature, but it is just tire pressure and tread depth here.”

WheelRight is a British company that is creating first of its kind technology for both the public and private sector.

“How our little business based in Oxford would be chosen to be here, we do really feel that we’ve been selected in recognition of what we’re doing,” said Catling. “We believe in what we’re doing. We think that what we’re doing is definitely something special.”

The welcome center also features the first section of solar road in the US that was innovated by a French company that is designed to have the same traction as a normal asphalt road.

The Ray has seen major progress in 2016, and new technological innovations are scheduled to come out on the highway early in 2017.