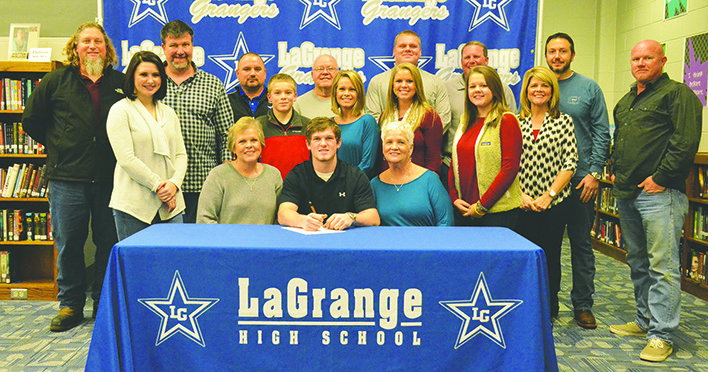 LAGRANGE – He had a change of heart.

When Matt Watford’s time as a high-school wrestler came to a close, he had the opportunity to continue participating in the sport in college, but at the time that’s not something he wanted to do, and that’s what he told his coach, Scooter Weathers.

“I had a good year, and I just said coach, I don’t know if I’m cut out for that,” Watford said.

Watford went on to graduate from high school, and he figured he would be just fine without college.

Soon enough, though, Watford was struck with the realization that he did indeed want to go to college, and he wanted to keep wrestling.

“I went back to work, and I was like college is not for me,” Watford said. “And one day I just got fed up and I was going nowhere with my

life, so I called coach (Weathers) and I said I want to go to college.”

When Watford was in high school, one of the schools that showed an interest in him was William Penn University in Iowa.

Following the change of heart, Weathers contacted the William Penn coach to see if he still had an interest in Watford.

William Penn’s head wrestling coach, Eric Reed, did indeed still want Watford to join his program, and he offered him an athletic scholarship.

Watford gladly accepted, and he celebrated the moment last week during a signing ceremony in the LaGrange High media center, with his coaches and numerous family members there to enjoy the moment with him.

Watford will become a college student, and a member of the wrestling team at William Penn, in January.

“I’m excited for the college, but it’s going to be a whole different animal,” Watford said. “It’s nine hours away. It’s going to be hard. But again, I have an amazing support team, and I’ll be able to make it through it.”

“Nobody pushed him. Nobody talked to him about it,” Weathers said. “He came by practice, and he walked in and sat down and said, I want to wrestle in college. I said, are you sure, because that’s a big commitment. He said he was, and I said where do you want to go? He said William Penn. I called coach Reed, and he had all the tape that I’d sent on him.”

Watford said he’s appreciative of what Weathers, who he calls a “second father,” did for him.

“Once again, coach was there for me, and he said we can do it,” Watford said. “He said let me make some calls. He and coach Reed have had my back.”

Weathers was happy to help Watford, and he’s hoping he’ll take advantage of the opportunity.

“Matt came to me and said, I made my mind up, and I wanted to wrestle,” Weathers said. “I called and (Reed) said, I’d love to have him. We got the paper work rolling, and the next thing we knew Matt was given a scholarship and a chance to wrestle. So now, the ball’s in your court. Take advantage of your opportunity.”

Watford said he’s grateful to all those who helped him reach this point, including all of his family members who were there for his signing celebration.

“I have an amazing support group, and they’re always there for me,” Watford said. “They��ve helped me out countless, and many times. I don’t know if I could have made it without them.”

OF NOTE: For more photos from the signing celebration, go to facebook.com/LDNSports