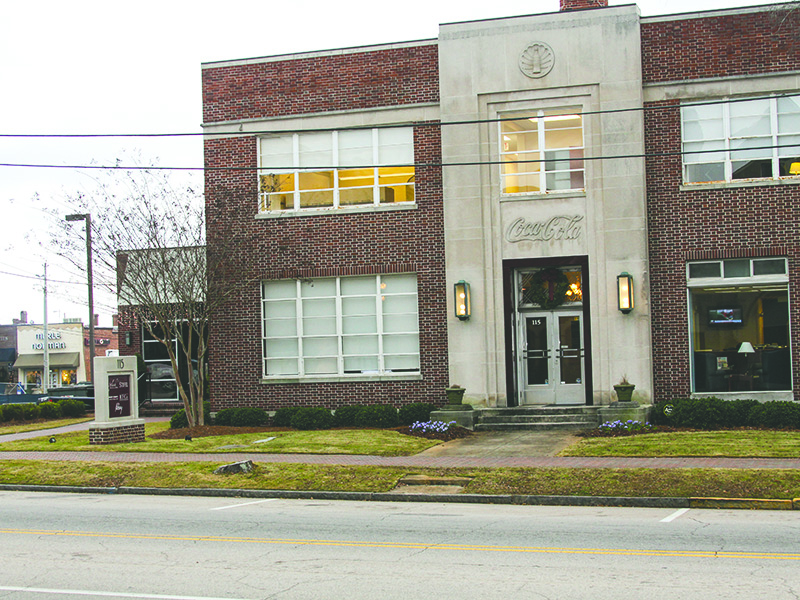 The LaGrange City Council discussed an ordinance on Tuesday that would limit parking on the section of Broad Street in front of the Coca Cola building to two-hours. (Photo by Alicia B. Hill | LaGrange Daily News)

LaGRANGE – The LaGrange City Council reviewed a request on Tuesday to restrict parking on the section of Broad street directly in front of the Coca Cola building to two-hour parking.

The request would affect two parking spaces in front of the building near Country’s BBQ and was made by property manager Ben Yates.

“Just with everything that is going on right now, that building has very limited parking, and we’d like you to reconsider that,” said Yates. “It was two-hour parking not long ago, and you had to take it down.”

Spaces have been limited in that section of downtown due to the construction on the hotel and parking deck projects, which has raised concerns for the businesses who need places for customers to park.

“I think there has been some issues with the construction of the parking deck, and some of the merchants there would like to see that those parking spaces are not tied up all day long so that retail customers can come and go,” said City Manager Meg Kelsey.

Changing the section to two-hour parking would require the city to create an ordinance, but the ordinance would not affect the parking across the street by the Presbyterian church or the Baptist church. The section did have a two-hour parking sign at one point, but it had to be removed because it was found to not be part of the area under the downtown parking ordinance.

“Basically, there used to be a two-hour parking sign in front of the Coca Cola building, but when they asked us to start enforcing it, it was determined that that block was never included in the two-hour downtown zone, even when there was a sign there,” said Mayor Jim Thornton. “So, we had to remove the sign because it is no longer an accurate statement, and we can’t enforce it.”

Other local businesses are supportive of the change, especially due to the limited parking and the possibility of lost business.

“I wouldn’t mind the whole street (being two-hour parking),” said Bobby Padgett of Country’s BBQ. “… My employees park there too, and just all of us take it for granted, and then if we lose 5 or 10 percent of the people who walk through because they couldn’t find a parking space. They’ll just drive somewhere else.”

The city hopes that the parking problem in the area will be completely solved in the summer when the parking garage currently under construction is expected to be finished.

“We are going to open up the parking deck hopefully in June or July… and that will eliminate that whole problem of parking in that area,” said Kelsey. “It is hard for those tenants that are in the Coke building. It is hard for Country’s employees who work there to find parking. Luckily, we have opened up – the Callaways opened up – the parking behind Bull Street and Vernon.”

If approved, the section would remain as two-hour parking even after the parking deck is opened to encourage shoppers who might want to stop for a short time, but don’t want to walk far.

It was also announced at the meeting that the residents of Ware Street had withdrawn their request to prohibit parking on a section of their street, though the speed bump in that neighborhood will still be moved for safety reasons.

The ordinance should be discussed again at the LaGrange City Council’s next scheduled meeting on Jan. 10 at 5:30 p.m. at 200 Ridley Ave.