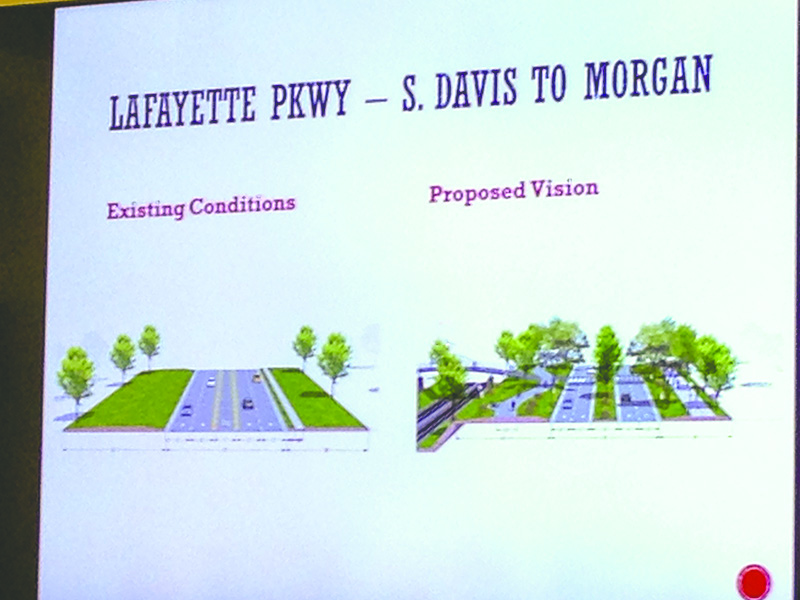 The corridor plan would include more medians, trees and paths for pedestrian and bicycle traffic. (Photo by Alicia B. Hill | LaGrange Daily News)

LaGRANGE – The LaGrange City Council reviewed a project expected to beautify the corridors leading into town at its regular work session Tuesday.

LaFayette Parkway, Greenville Street, Whitesville Road and Hamilton Road are the primary roads considered in the plan which does not currently address usage of property along the corridor, as it was created to look specifically at the roadways themselves. The project started out with the goal of addressing the appearance of the roadways, but as it has gone on, safer roadways and better pedestrian access have become a goal of the project as well.

“Primarily, it started as an aesthetic issue, but certainly, I think it will… try to plan for more than just cars, and make sure that our transportation systems are inclusive of other types of transportation – whether it’s bicycles or pedestrians – but to be more inclusive in that, and then also safety concerns” said Threadgill. “There are actually a lot of accidents – especially on LaFayette Parkway and Davis Road – so those are some of the things that we kind of had in our brains at the time.”

If constructed, the sidewalks from the corridor project would connect to sections of the Thread Trail that is scheduled to begin construction early in 2017, but Threadgill made it clear that the plan would still require more work to be put into place in specific locations. While the council showed interest in the project, they did show caution on parts of the project that could prove especially costly, like buried power lines.

“One thing that you’ll notice in all of these images is the power lines are gone,” said Threadgill. “I will say that burying powerlines is very, very costly, and this plan and vision are things that we can take the (initial plan), which parts of these that we want to do.”

The project would require approval from the state Department of Transportation because it would be on state land, though the city made a point of emphasizing they do not want this project to hold up DOT projects such as the Hamilton Road widening project. The city expects to see progress on Hamilton Road in the near future, though property acquisition for that project is not expected to get underway until, at earliest, next week.

“(The DOT) thinks that is going to take two years to acquire all the property, so construction is way off,” said Mayor Jim Thornton. “They have Greenville Street bridge starting next fall. The replacement is about a nine-month process, a year maybe. They also have put in for 2020, a connection on the north side from the S-curve to connect over to the interstate, so that is back on the radar. So, the DOT is working on a lot of stuff… but it has been made very clear to our friends at the DOT that we don’t want to do anything to slow down Hamilton Road.”

The city plans to vote on whether to approve the plan at their Jan. 10 meeting, so that the city can decide how much it would be willing to spend on the project and which parts could be considered for special-purpose, local-option sales tax funds in the November 2017 election or whether to approve funding for the project at all. The city of LaGrange is scheduled to meet again on Jan. 10 at 5:30 p.m. at 200 Ridley Ave.