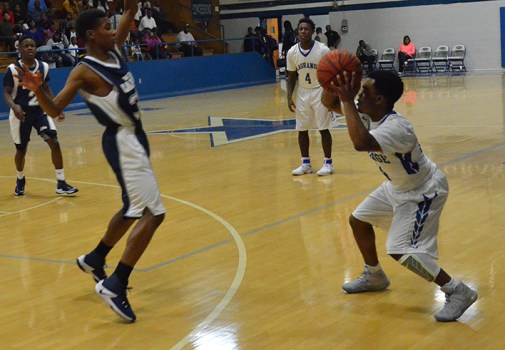 LAGRANGE – The LaGrange Grangers took the first step toward what they hope will be a tournament championship by beating WD Mohammed 67-56 on Wednesday night.

The Grangers (10-1 overall) moved into the winner’s bracket in the LaGrange Toyota Invitational, and they’ll play Mundy’s Mill at 7:30 p.m. today.

If LaGrange wins today, it would play for the tournament championship on Friday night.

In Wednesday’s tournament opener, LaGrange led by 17 points early in the fourth period, but WD Mohammed hung tough and got as close as seven points with a little more than a minute remaining.

The Grangers scored the game’s final four points, and they walked away with their seventh straight win.

LaGrange head coach Mark Veal said his players have struggled a bit putting opponents away, and that’s something he said could cause problems as the competition level rises.

“One thing with our team, we’re able to get big leads, but we just make it too close in the fourth quarter,” Veal said. “It’s been that way all year. It doesn’t matter who we’re playing. We’ll get a big lead, but we make it interesting. It’s good to get the lead, but we’re going to run up against some teams coming up, we can’t do that.”

Despite some late-game struggles, though, the Grangers have continued to win, and consistently strong performances from the bench players is a big reason why.

On Wednesday, Daz Williams came off the bench and made three 3-pointers to score nine points, and Bo Russell (seven points) and Quez Jackson (six points) also provided a spark.

Senior LaPerion Perry led the Grangers with 20 points, and he came up big in the fourth quarter with 10 points.

Senior post player Kenan Gray added nine points, and he wreaked havoc inside as always with a bunch of blocked shots and rebounds.

When Williams hit a 3-pointer with 7:08 to play, LaGrange’s lead was 17, but WD Mohammed fought back.

Sabree hit a 3-pointer with 3:40 left to get the Caliphs within nine, and they got as close as seven with 1:10 to play.

Perry answered with a big basket on the other end to give the Grangers a 65-56 lead, and he made two free throws with 43 seconds left to complete the scoring.

Perry made three shots from the field and was 4-of-6 from the free-throw line in the final period.

OF NOTE: For more photos from Wednesday’s game, check out Facebook.com/LDNSports