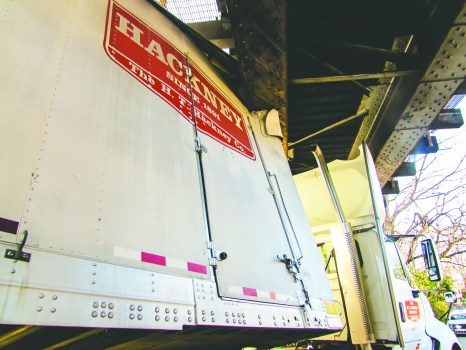 The top corner of the tractor trailer was sheared off as the driver attempted to drive underneath the overpass on Miller Street. (Photo By: Melanie Ruberti | Daily News)

Train traffic backed up through Alabama

LaGRANGE – One tractor trailer driver was cited after he attempted to drive his rig under a bridge – and instead got stuck underneath it.

The accident happened just after 2 p.m. on Thursday where the railroad tracks cross over Miller Street between Douglas and Leeman streets.

The driver allegedly told LaGrange Police Senior Patrol Officer Wesley Engle he thought his truck would fit under the bridge, despite seeing warning signs the clearance was less than 13 feet.

The semi was labeled the “H.T. Hackney Company” on the side of the rig. SPO Engle said it measured 13-feet 6 inches inches in height.

The top corner of the truck was sheared open when it hit the bridge. The cargo inside the semi also shifted to one side when it struck the tracks, lifting the back wheels off the ground.

The driver was not hurt.

LaGrange police closed down that stretch of Miller Street to through traffic for almost two hours as a tow truck driver attempted to pull the rig out from under the bridge.

CSX crew members stopped train traffic and inspected the bridge to ensure no damage was done to the structure.

A crew member said at one point, trains were backed up to Alabama in one direction and stopped all the way to Manchester in another direction.

CSX can fine companies for accidents that prevent train travel, said one employee. They can charge for the duration the trains are stopped and per car.

The driver was cited for not obeying traffic control laws, said Engle.

He was able to continue on his route.