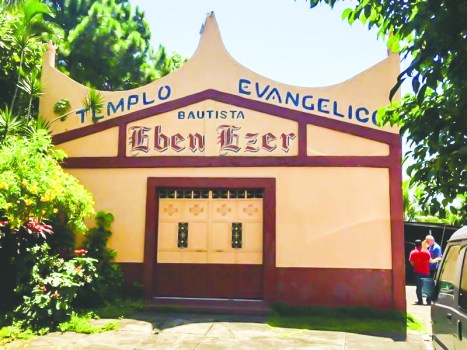 Ebenezer Baptist Church is Santa Lucia is where the Frye family will work with the youth, teach bible and show congregation members how to share their faith with others. (Photo: Submitted) 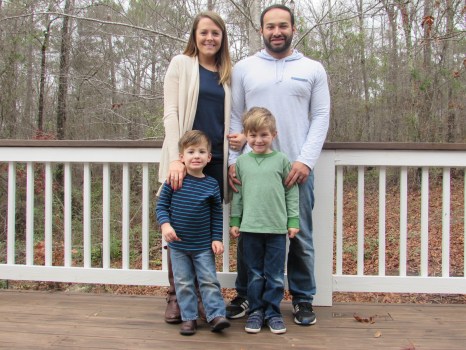 Meagan and Joe Frye stand with their two children Jacob, 4 and Levi, 2, outside Meagan’s parent’s home in Troup County. The family is preparing to leave for Santa Lucia Cotzumalguapa, Guatemala where they will perform mission work with a local church for at least two years. (Photo By: Melanie Ruberti | Daily News)

LaGRANGE – Joe and Meagan Frye say they received a very clear sign from God in spring 2016 they would soon be leaving Troup County and moving to a foreign country.

The couple had just returned from a mission trip to a small Guatemalan town. It was their second visit in two years with fellow congregation members from Rosemont Baptist Church.

“During the first trip (Spring 2015), Joe asked me, ‘Could you see yourself living here?’ I said no, but we continued to pray about it and the Lord worked on my heart,” said Meagan.

The Fryes even attempted to sell their home, but without success.

After their second mission trip, the couple had no doubt it was time to get their affairs in order.

“We came back and we both knew it was time for us to go (to Guatemala),” explained Joe. “We put our house on the market and it sold instantly – within days.”

“It was like putting a fleece out,” said Meagan. “We said, ‘Okay Lord, if you really want us to go, show us the way.’”

That is when the Frye’s path to the Central American country was abundantly cleared of any stumbling blocks.

The couple held a yard sale in the fall and sold off almost all of their belongings. Most people paid more than the asking price, the Fryes said.

They went back to Guatemala and immediately found a church to begin their work. Ebenezer Baptist in the city of Santa Lucia Cotzumalguapa is where Joe and Meagan will train locals to become disciples of Christ.

Joe was born in El Salvador. He lived in an orphanage and was adopted by an American family when he was 2 years old.

His parents always encouraged him to learn more about his heritage, Joe said. He visited El Salvador and later graduated with a major in Spanish from LaGrange College.

Joe’s knowledge of the Central American culture and language will be extremely useful for the Frye’s mission work.

The couple’s goal is to teach church members more about the Bible and how to share it with others. Their hope is the Guatemalan congregation will spread its faith with other villages and even other countries.

“We want to empower and equip the people to be strong in Christ,” said Joe. “Hopefully, they will be strong enough to go out and make new disciples in Christ … that would be success to us.”

“We want them to do it on their own and do it well,” added Meagan. “… That’s why it will be great to work with teens and partner with other (Guatemalan) pastors because they can go across the borders to El Salvador or Honduras and spread the faith. They know the language and culture better than we do and will be able to reach more people than we can on our own.”

While there, Joe will also attend seminary school which will enable him to work with more local pastors.

The couple plan to be gone at least two years – if not more – and they will not be traveling alone.

Their two sons, Jacob, 4 and Levi, 2, will also be moving with their parents to Guatemala.

“There is always a worry about health issues and such, but it is exciting to have them be a part of the ministry,” Joe said. “As they get older, they can participate, greet fellow missionaries … and it will be exciting to see them grasp the ‘great commission.’”

“I am so excited for them to go along, learn a new culture and to be right beside us in our ministry work,” Meagan said. “… God called us to go as a family. It wasn’t just Meagan and Joe; it was all of us.”

The family leaves next Monday for their new home in Santa Lucia, Guatemala.

While the Fryes’ are sad to say goodbye, the couple knows their mission is for the greater good.

“We’re so thankful for this community and their support,” said Meagan. “I love LaGrange so much and have lived here all my life. It can only be a call from the Lord for us to leave here.”

The Frye’s mission trip is being supported by Rosemont Baptist Church and the International Mission Board, among other groups.

Meagan and Joe will be chronicling their journey through a monthly blog.

Anyone wanting to follow their mission work or donate to their cause can visit youdidnotchooseme.blogspot.com.