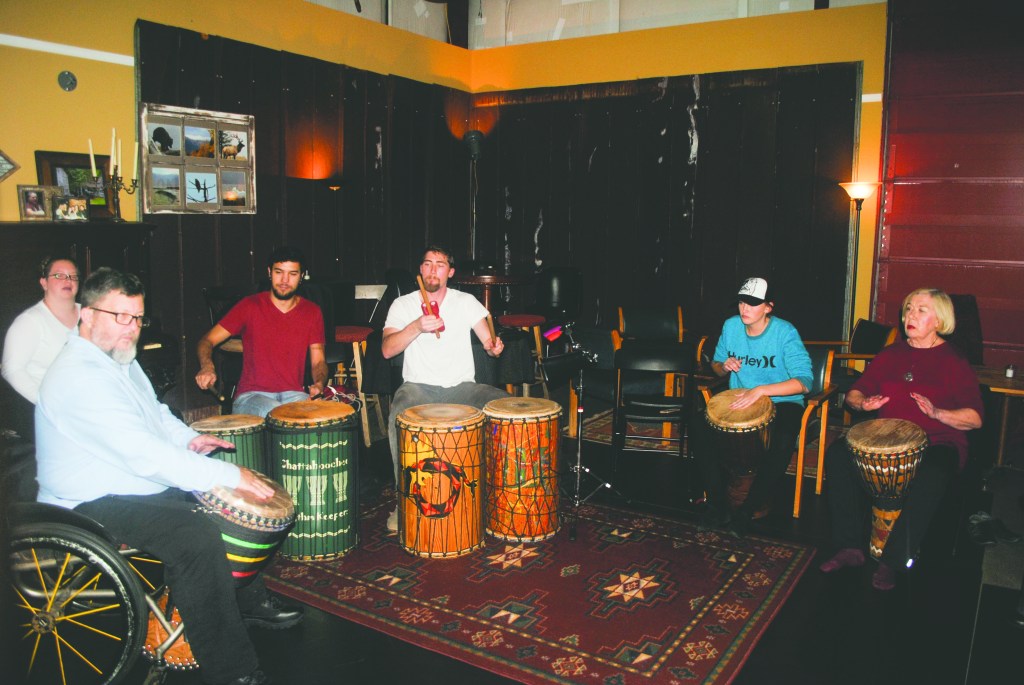 A group of participants take part in a drumming session at Pure Life Studios as they follow the lead of instructor Tom Harris (in white, on left). (James Simpson II | LaGrange Daily News)

LaGRANGE- There were plenty of free spirits making beautiful harmonizing music Wednesday night at the Pure Life Studios at 206 Clark St. — and it all comes from making beats and sounds on a drum.

The Chattahoochee Rhythm Keepers is an African drumming group/class where people learn to play the djembe, a West African hand drum. The class takes place in four-week cycles for $60 on Wednesdays from 7 to 8:30 p.m. The instructor is Tom Harris, who has been playing the drums now for 20 years.

“The class has been going on for 2 ½ years and I started it, but a local person, Susan Marshall, had come to a class of mine in Douglasville and she invited me down to LaGrange to start a weekly class. We tried it out for a month and had 17 people show up and at that point we then started the group,” said Harris.

Each class usually features around 10-15 people attending. No skill or previous experience is required to participate and Harris brings enough drums every week for people to use.

A typical session starts out with participants drumming freely to get in a flow and comfortable with their drums. After that everyone in the group introduces themselves and then Harris goes into instructions of what the class will be working on. As the instructor, Harris wants everyone to follow his lead as he introduces a series of different melodies, beats and rhythms on the drums to make synchronized, smooth and free-flowing music but also to sharpen up all the drummers’ skills. When the group is drumming in sync, the group sounds similar to a high school band making music in harmony.

“We have a real welcoming group,” said Harris. “Some of our people are very talented musicians and some are not, but everybody’s voice is welcomed in this room. My commitment is if someone shows up and they want to do this, even if they don’t have all the skills, I’m going to let them participate.”

“Many of the people in our group are going through some trauma in their lives but they say they’re not going to miss a Wednesday class. It’s like a release point for them and they leave here feeling so lifted up.”

The origins of the music come from traditional West African music from the Mandinka ethnic group in Guinea, a country on the west coast of Africa. Harris learned about the West African music from visiting Guinea twice and he also did some research on how the people of Guinea gathered together to sing, dance and harmonize with each other and connect together.

“In Guinea, it’s more of a celebration of community than it is a performance,” said Harris. “The people there are just happy to be together.”

As the instructor, Harris enjoys teaching his group how to make beautiful, good-sounding music on the djembes but he also sees the sessions as a family atmosphere.

“Everybody here has a voice and everyone’s voice will be honored,” said Harris. “We’re here to honor the music and play with joy.”

If you’re interested in joining the Chattahoochee Rhythm Keepers drumming class, contact Harris at 770-843-3556 or email him at tomharris57@comcast.net.