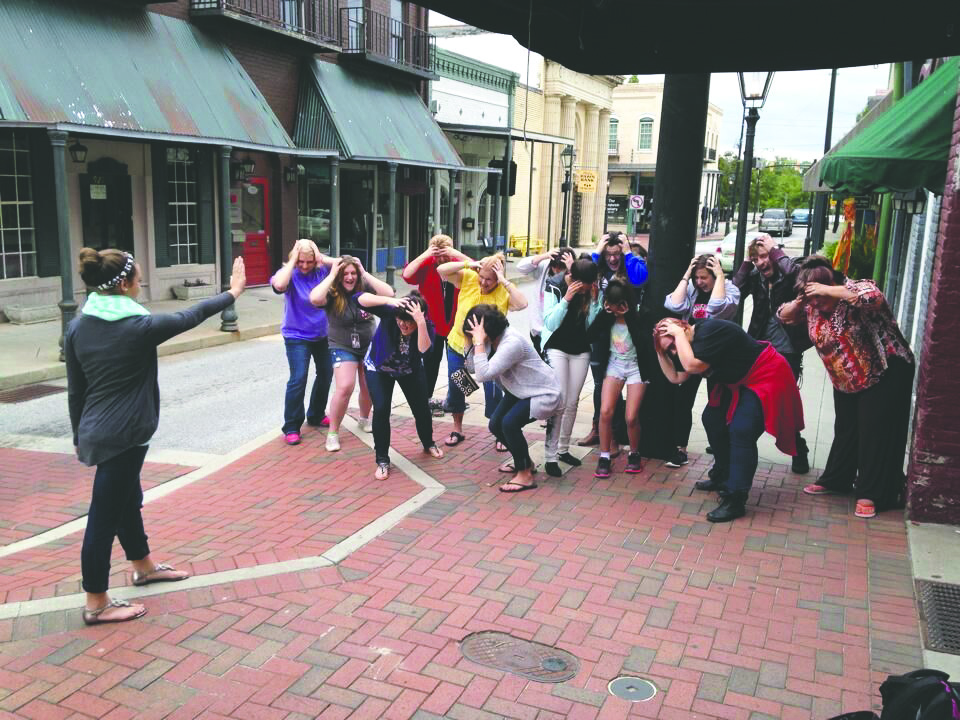 A group of tourists act out a scene in Conyers, where the TV show “The Originals” is filmed. (Submitted)

GREENVILLE – A new and appealing tourism attraction called “Georgia’s Undead Trail” was announced and launched last week by the Meriwether County Chamber of Commerce and Tourism. The Georgia Undead Trail will take visitors on a 93-mile journey through urban landscapes and trendy downtowns that have all been the stage set of television series portraying zombies and vampires.

There are five destinations where these trails are located and where the filming for television series have taken place: Atlanta, Conyers, Senoia, Woodbury and Covington.

“Georgia’s film industry is booming, and one of the many benefits of all that filming is that visitors from around the world want to come here to experience the locations made famous by their favorite movies and TV programs.  Film tourism is a real money generator that remains long after the project has wrapped,” said Kevin Langston, deputy commissioner for tourism at the Georgia Department of Economic Development (GDEcD), which plans, manages and mobilizes state resources to attract new business investment to Georgia, drive the expansion of existing industry and small business, locate new markets for Georgia products, inspire tourists to visit Georgia and promote the state as a top destination for arts events and film, music and digital entertainment projects.

“Georgia’s Undead Trail is the perfect tourism offering that can appeal to fans from all over the world who are wanting to experience the locations of their favorite television shows and films,” said Langston.

Through its Tourism Product Development Division, Meriwether County has been the beneficiary of a number of grants which have helped to fund several murals featuring historic locations, a series of butterfly gardens, geocache adventures and the President Theatre.

By strolling through these different unique trails, vampire and zombie crazed fans will have a chance to fully immerse themselves in the various film locations, attractions and restaurants located in Georgia that are used for well-liked, fan favorite shows like “Teen Wolf,” “The Walking Dead,” “The Vampire Diaries,” “The Originals” and others. To add to the allure of Georgia’s Undead Trail, it also features a “Top 10 Must-See Sites” list that includes popular film tours, shops, restaurants and even a “zombie-themed” geocache trail. Some of the attractive sites are The Mystic Fall Tours, Atlanta Movie Tours, Walking Dead Café, Woodbury Zombie Geocache and The Celtic Tavern.

Covington serves as the fictional town of Mystic Falls, Virginia where “The Vampire Diaries” is shot at. Conyers is the filming home of CW’s “The Originals”, which is known as New Orleans French Quarter. “The Walking Dead” has been shot in a multitude of places throughout Atlanta and in Senoia, where Senoia’s downtown distract has served as the backdrop for The Walking Dead for the past five years. In Woodbury, tourists can take part in the Zombie Geoquest, shop at zombie-filled antique stores and visit Woodbury City Park on Main Street.

“Each region in the state of Georgia has a tourism project manager and Georgia is divided into regions for the purposes of tourism,” said Carolyn McKinley, Meriwether County Chamber of Commerce and Tourism. “Those project managers got together and thought of this trail idea. The trail concept is not necessarily new in Georgia but what’s happened is that people have recognized the sudden interest in seeing film sites like The Walking Dead, Vampire Diaries and more. People come and want to take tours and they want to see all the film sites.”

The trails in each location are opened for tourists to visit at any point and time throughout the day. McKinley stressed that they want to make the trails more visible and give tourists a rewarding experience, especially with the Georgia film industry expected to rapidly grow in 2017.

“I think it’s an important additional component,” said McKinley, referring to how significant the introduction of the Georgia Undead Trail can be to the state. “We identified all the things within the three tourism regions that would be of interest to tourists and we packaged them into trails. A tourist will have a menu of options and this gives them one more menu choice, one more bucket of choices to choose from. They will be very responsive because shows like The Walking Dead and Vampire Diaries already have cult following and this just gives the tourist a more comprehensive experience.”