Chipping through the cold 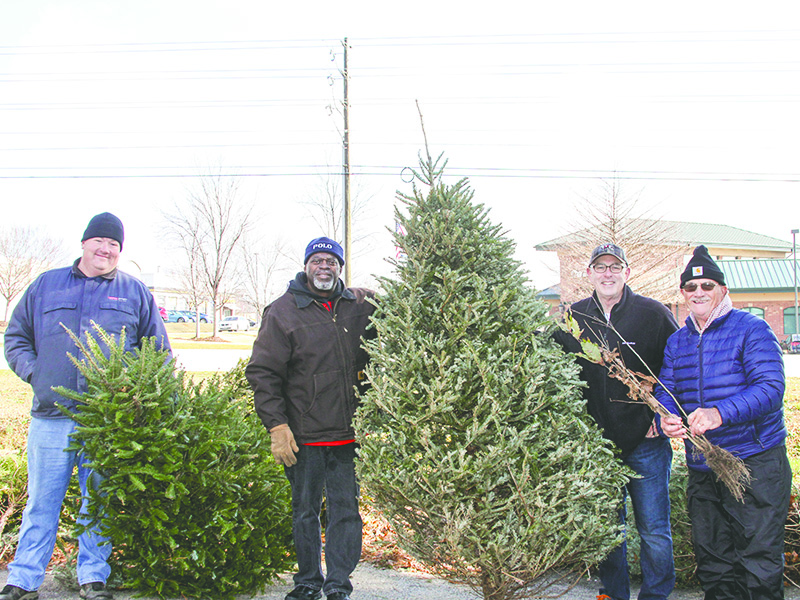 Scott Alan, Howard Mingo, Scott Landa and Matt McGowan show off some of the trees collected for Bring One for the Chipper. (Photo by Alicia B. Hill | LaGrange Daily News)

Like everyone in Georgia, the organizers of Bring One for the Chipper had worried that icy roads and winter storms could have a negative impact on their plans, but since Troup County was mostly passed over by the storms, the committed group only had to deal with below freezing temperatures as they helped move trees and unload recyclables.

“Fortunately the roads didn’t turn out as bad as everyone thought they would,” said Keep Troup Beautiful’s Executive Director Scott Landa. “It took a while this morning to get going… We’ve had about 25 come by so far with trees and various things – electronics or other recyclables.”

Many of the trees brought to the event were used for the U.S. Army Corps of Engineer’s project that puts old Christmas trees in the lake to create a good environment for small fish populations, which in turn helps grow large fish populations. Trees that were not put in the lake, were put through a wood chipper, then sent to a landfill.

“We’ve had pretty good activity,” said Keep Troup Beautiful’s Chairman Howard Mingo. “Plenty of trees have come and gone. A guy just came with a pick-up truck to pick up a bunch of trees for (West Point Lake). He puts them in there and the smaller fish get in them and then the larger fish come get them out. They are the ones (people) are actually fishing for.”

In many areas, the ability to recycle electronics is one of the major draws of the event that Keep Georgia Beautiful-affiliated groups host across the state, but in LaGrange, organizers were glad to say that electronics recycling is available 365 days a year at the LaGrange Recycling Center.

“We take electronics year-round, and normally that would be what most people bring, but over the last few years we have tried to get the word out that we take them all year long,” said Recycling Manager Scott Allen.

People dropping off didn’t leave empty handed though. Besides being entered for a drawing, people who dropped off items for the event were able to choose from trees that the Georgia Forestry Commission donated for people to plant and seeds donated by Keep Georgia Beautiful to plant when the weather warms back up. Plantable trees that were left over following the event were left at the LaGrange Recycling Center for anyone interested to pick up.

Then annual event was held in the Home Depot parking lot for several years before organizers decided that it would be easier for people to drop off their trees and electronics at the LaGrange Recycling Center across the road.

Keep Troup Beautiful’s next big project will be the Great American Cleanup which is scheduled to coincide with Earth Day on April 22. The annual event aims to make a visible impact on the community by having as many people as possible commit to clean up the cities and counties where they live and work.

“Leading up to that we will be enlisting groups to take on clean-up projects around Troup County,” said Landa. “We’ll support that. We’ll support it with bags and gloves and vests and things like that to encourage that. We get a lot of local businesses and local groups involved in that, and they can pick an area to clean-up then we’ll have a celebration to see who has picked up the most trash and who has done the best job of cleaning up.”

The group also holds regular talks at different schools, connects local businesses with the Adopt a Spot program – which they hope to expand to include the Thread once the trail is installed – and hosts the Doris Jefferson Memorial Scholarship.

To keep up with Keep Troup Beautiful’s latest projects check them out on Facebook or on their website at www.keeptroupbeautiful.com.