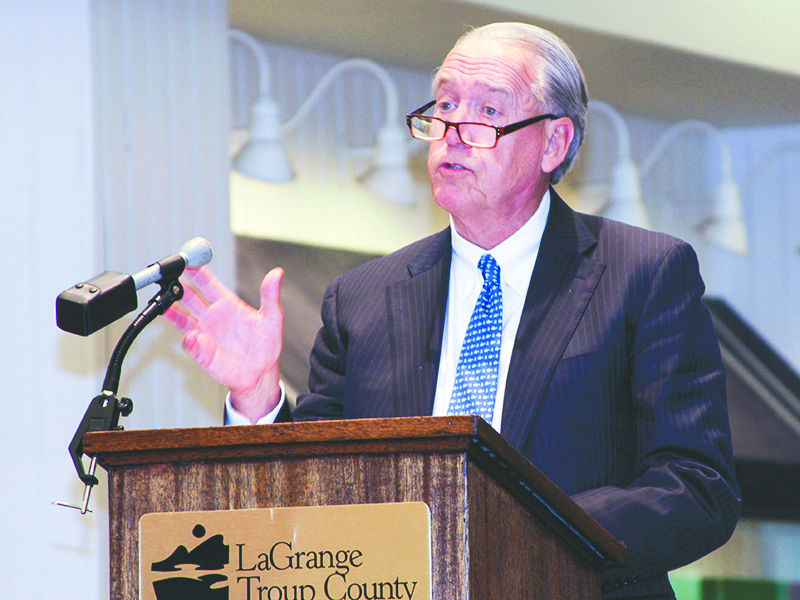 LaGrange Mall Owner Jim Hull announced the additions of Hobby Lobby and Dunham's Sports to the LaGrange Mall, with both stores expected to open in September.

LaGRANGE – Hobbyists and outdoorsmen alike will soon each have a local store to buy the supplies needed to take part in their favorite pastimes thanks to the introduction of new stores at the LaGrange Mall.

LaGrange Mall Owner Jim Hull announced the introduction of a Hobby Lobby and a Dunham’s Sports to the mall on the side where the J.C. Penney’s was formerly located on Monday. The mall will need to expand in order to accommodate the two large stores, but both are expected to open in September. Work is already underway to make way for the major retailers.

“Together we are creating a destination shopping area for the LaGrange Mall and also for the LaFayette Parkway corridor that goes from I-85 down to Davis Road – a retail corridor here,” said Hull. “We have already completed the first stage of this with the Aspen Dental that we just built outside and the soon to be coming Firehouse Subs, and today we are going to announce that we have leases signed and will begin construction on a 55,000 square foot facility for Hobby Lobby, and a 52,000 square foot facility that will be occupied by Dunham’s Sports.”

Hull said he believed that the Tax Allocation District that was initially proposed in 2010 and passed in 2011 was the driving force that allowed the Hull Property Group to attract major retailers to the mall. The TAD went into effect January of this year.

“Once the facilities to be occupied by Hobby Lobby and Dunham Sports are completed, the LaGrange Mall will be a five-anchor mall, and that is very unusual for a community this size,” said Hull. “… Back in December of 2015, we spoke here at the LaGrange Mall on the Tax Allocation District that had been brought into (being), and at that time we emphasized that there were three major aspects of the TAD.

“The first was that the city of LaGrange and Troup County would not have any monies in the creation of the TAD. Secondly, that the TAD would enable Hull Property Group to use its own capital. And the third was, that that capital through the TAD would attract nationally branded major retailers who otherwise wouldn’t come here to LaGrange or wouldn’t come on this time schedule. It enabled us to put LaGrange and our property here at the front of the line, and so we are so glad today to be able to say that all three of those aspects have held true as we stand here a year later.”

LaGrange Mayor Jim Thornton expressed gratitude to the investors and city employees who worked hard to pull in the big stores, but in his opinion, it was the voters who made the addition of these national retailers possible.

“The establishment of the TAD really goes back beyond (December 2015) to 2011, when the voters of LaGrange and Troup County went to the polls and overwhelmingly approved the redevelopment of powers for the city council,” said Thornton. “Without the approval by the voters of the city of LaGrange – and also it was done throughout the county as well – but without that approval by the voters on that referendum, the TAD couldn’t have been created, and we wouldn’t have been able to create the incentive that we have, and we wouldn’t be here today (to announce these stores).

“… Ultimately the voters were the ones who said, ‘We as a community want to do something to make our community more attractive for nationally branded retailers and for other investments from throughout the nation.’”

According to Thornton, the TAD created an incentive to find a new retailer for the J.C. Penney’s location and locations surrounding the mall. The J.C. Penney’s location was still under lease and the chain was still paying rent on the location, but the TAD provided an incentive to fill the space by agreeing to keep the tax bill at the current rate instead of increasing it for the new retailer.

“We are truly excited about this,” said Troup County Commission Chairman Patrick Crews. “This is great new retail shopping for citizens of this area, and anytime we can get new shops, we’re tickled to death. … We look forward to creating opportunities for folks to come into this area and shop from our neighboring counties.”

Local officials and mall owners both hope that the addition of these new stores will help attract more retailers and restauranteurs to the area.

The mall owners expect phase one of their plan for the mall cost more than $10 million. That phase of their plan includes the buildout of Hobby Lobby and Dunham Sports as well as the addition of Aspen Dental and Firehouse Subs and the clearing of the old Ryan’s location, but the mall owners have been careful to attract businesses that they believe will benefit the community.

“Both Hobby Lobby and Dunham’s Sports are strong national retailers and we are thrilled for these stores to join the LaGrange Mall,” said Ky Widener, senior vice president of leasing, in a press release. “We have been disciplined in our approach to attract only the right tenant to the property in order to continue to develop the mall as a powerful retail and restaurant center. We have been working closely with local leadership for over a year to bring these popular stores to LaGrange and we are excited for what this partnership can accomplish in the future.”

The mall’s owners are already in talks to introduce more restaurants and businesses to the locations surrounding the mall and expect to be able to announce additional businesses coming to mall locations later this year. A national restaurant chain is among the businesses that they hope to reach an agreement with in the near future.