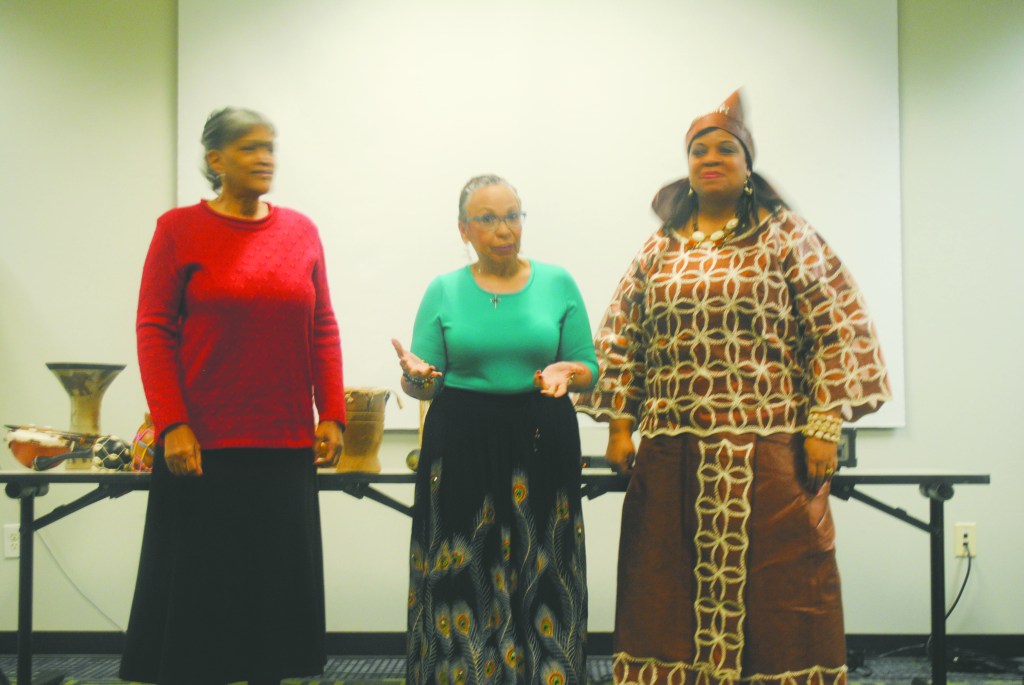 LaGRANGE- Storytelling was at its finest Tuesday night at the LaGrange Memorial Library, as storytellers Connie Askew, Cheryl Mason and Marsha Allen expressed their passion and gifts for the African-American culture to the audience through song, poems, dance and especially storytelling.

Many were in attendance to learn and listen to the encouraging, uplifting and intellectual messages that each woman was communicating to the crowd. Throughout the night, each woman conveyed their message differently through the lens of African culture and added an artistic quality to their message that was able to resonate to both young and old.

“I would say the passion comes from when I started working at the Memorial Library back in the 80s and I saw the children’s librarian, Pat Gay, and she did storytime on Wednesdays,” said Askew. “I started to do them with her and that just woke something up inside of me and I continued to work with her. I learned from the best.”

“You know I had the passion since I was a child,” said Mason. “I loved listening to stories first of all and I think I just started telling stories to family and friends. As you go through life, you begin to have more stories to tell and develop that desire to tell it in a way that is not only to entertain but perhaps challenge and inspire others.”

The African-American storytelling event was put on by the Troup County African-American Heritage Council and there were numerous paintings that showed the representation of African art and culture on display from different painters and artists for viewers to see.

The event included two poems read by Allen on inspiration and positivity that she aimed to get across to the children that were in the room.

Connie Askew used her talent by singing African-related songs, told a tale about Bugs Bunny, read a renowned poem called “Things” by children’s author and poet Eloise Greenfield and had some of the children in attendance join in on an African dance called “Funga Alafia,” a song of welcome from African tribes meaning “From the purity of my heart, I welcome you.”

“We wanted to put something together for the community and with me being an elementary teacher, I wanted to do something for the children and I wanted to help with storytime at the library and it all came together,” said Askew. “I want children to be the best they can be. Don’t accept defeat because it’s not important to you. Just give it your best whatever you do, whether you’re standing in front of your peers and the public, just give it your best.”

Mason shared a personal story about making a difficult transition of moving from Los Angeles, Calif., to the southern roots of Nashville, Tenn., and how it was a much different culture than what she was used to.

She also told a story of a young girl named Priscilla, whose mother was sold into slavery, later was purchased by a Cherokee Indian and his wife to work on a plantation, then was rescued by a man named Massa Basil Silkwood and his family. The memories Priscilla carried with her about her mother was centered around the Hollyhock flowers her mother planted near a cow pond before she passed away, that Priscilla planted during her time working on the plantation. Mason explained a trip she experienced during her journey to the southern part of Illinois in search of Priscilla’s flowers and how moving the story was to her.

The story is based on a true story and is called “Priscilla and the Hollyhocks” written by Anne Broyles.

“Personal storytelling has the ability to connect because despite all of our differences, ages, races, etc., we have those same feelings and sharing our stories is a way to emphasis the ways we are the same and different,” said Mason. “People come to hear something that resonates with them. Storytelling is a gift you give to people and they take from it the what they want to.”