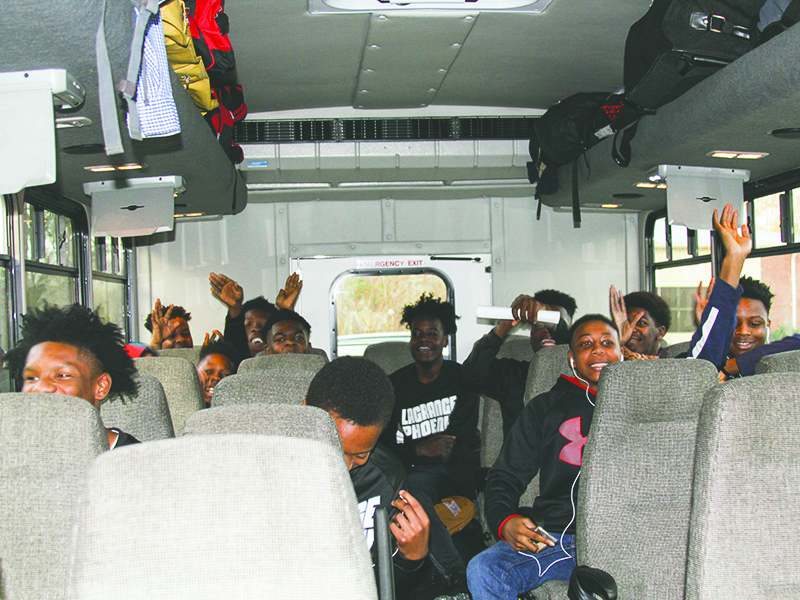 LaGRANGE – The LaGrange Housing Authority’s Phoenix Basketball team began its drive up to Bowling Green, Ky., on Friday following much fanfare and celebration on behalf of residents of the area and those involved in the community.

The twelve team members and their coaches got pumped up for the Annual Martin Luther King, Jr. SERC Basketball Challenge with speeches by Mayor Jim Thornton and community leaders as well as a police escort through town as they got ready for the long ride up to the tournament.

“This is the most exciting thing for the housing authority,” said West Georgia Star Executive Director Zsa Zsa Heard. “I’ve been here two years, and this just really shows me that the community does care. We are changing, and it’s a good change. It’s a change for our future.

“These boys are our future, so we want to make sure that we put them on platforms to lift them up – not to give them a hand out, but to lift them up – and they continue on this path, and then that shows me when we have our mayor to come out, the city council, the sheriff’s (office and) the police department, that we are coming together to make this happen for our team. So, we hope it spreads. We hope other kids and the other residents come out and get on board and send us much support.”

This weekend’s tournament will be the team’s first basketball tournament with the South Eastern Regional Conference of the National Association of Housing Redevelopment Officials which works to empower local housing and community development agencies ranging from Kentucky to Florida, and local leaders hope that it will be a great experience for the boys on the team.

“(This is) the experience of a lifetime for some of them for them to be able to adventure out and go out and share with other teams in other communities,” said the Rev. Michael Jackson, chairman of the LaGrange Housing Authority. “And it’s a good chance to get together.”

The team was created by West Georgia Star, a non-profit that offers residential services to the residents of the LaGrange Housing Authority and the surrounding community. According to organizers, the program has been going for about three years, but it is just now picking up steam.

“This is our first (time) where this has been a big event for us with them going to Bowling Green, Kentucky,” said Community Activity Liaison Maiya Dowell. “This is the first time some of them have been able to get out of the state of Georgia, so we are very excited, and we just really want to send them off in a positive way and keep their spirits up.”

The LHA Phoenix team plans to return from the tournament on Sunday. The LaGrange Housing Authority is expected to host next year’s MLK Tournament. To find out more about West Georgia Star and their other projects go to westgeorgiastar.com.