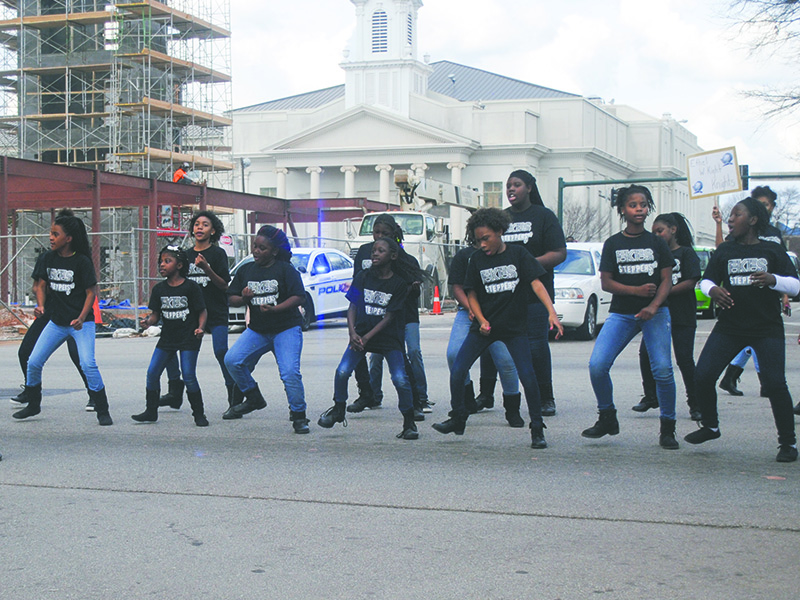 Students from the step team at Berta Weathersbee Elementary School do a routine during the Martin Luther King Jr. parade on Saturday afternoon.

LaGRANGE- The theme of this year’s Martin Luther King Jr. parade was Unity and that was on full display Saturday afternoon as many groups and organizations took part in the annual event.

“The whole idea of the theme is unity,” said Yvonne Pittman, the parade coordinator for more than 20 years. “We need to join hands and work together.”

This year there were two people chosen as parade grand marshals.

Two retired educators, Becky Grubbs and Faye Benjamin, were this year’s honorees and they were both thrilled to participate in Saturday’s parade and be recognized.

“I take it as an honor,” said Grubbs, who was a teacher for 34 years before retiring in 2004. “When Yvonne called me and told me I was selected as grand marshal I said ‘Oh goodness no.’ It’s just kind of not my thing to be pointed out and stand out that way. Then she said the theme was unity and the fact that I work with children fits that. So yes, it is a big honor.”

“I was just totally shocked they called me about being the grand marshal because I’m just running around doing what I do everyday and I get this call. I feel humbled and honored they would even ask me,” said Benjamin, who taught in the Troup County school system for more than 30 years, as well as coaching girls’ basketball at Troup High and LaGrange High School.

Grubbs and Benjamin have been friends for years and even though both are retired, they run a free after school tutoring program together for elementary students, called This is Our Father’s House in LaGrange.

“To be in this parade is just to me a fulfillment of what my heart has always desired and that’s for black people and white people in this country to work together,” said Benjamin.