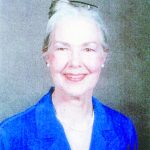 Val was an avid hunter and marksman.  She won the 1973 Handicap Championship of Georgia for Men and Ladies with a 12 gauge shotgun.  In 1976 she won the title of Southeastern Indoor Archery Champion.  Driving a Ford Mustang, she won the Southeastern Autocross for Women in 1987.  Val loved to garden and cook.  While taking cooking lessons in New Orleans, she found a lasting love for jazz.  When James bought an airplane, she took lessons so she could land the plane in case of an emergency.

In addition to her parents, she was preceded in death by brothers, Eugene Gay and David Gay, sister, Beatrice Gay, brothers-in-law, Worth Adcock and Ron Kramer and nephews, Michael Gay and Michael Bryant, Jr.

Visitation will be held Tuesday, January 17, 2017 from 4:00 pm – 6:00 pm at Hunter Allen Myhand Funeral Home.  The Funeral Service will be held Wednesday, 10:30 am at East Vernon Baptist Church and will be officiated by Rev. S.T. Janney and Rev. David Pasley.  Interment will follow at Cedarwood Cemetery, Roanoke, AL.

In lieu of flowers, donations may be made to the Wildlife Association, the Alzheimer’s Association or East Vernon Baptist Church

Please join the family in honoring the life of Valeria G. Adcock, by visiting www.hunterallenmyhand.com and posting your tributes and memories.  Arrangements are in the care of Hunter-Allen-Myhand Funeral Home, LaGrange.