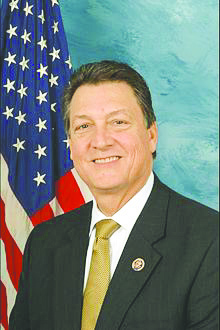 “We disagreed on some things while I was in office,” Westmoreland said, after giving a talk to the Troup County Republican Women. The two didn’t agree with how Georgia fared in redistricting efforts, he said.

“We’ve traveled together and he’s the nicest person in Congress,” Westmoreland said.

Lewis, a civil rights leader who represents metro Atlanta, has come under fire in recent days for announcing he will skip the Friday inauguration of President-elect Donald Trump. Lewis said he doesn’t believe Trump is a legitimate president.

Lewis is scheduled to speak next week as part of LaGrange College’s annual Martin Luther King Jr. service. Although the talk was scheduled weeks in advance, the timing of the talk and Lewis’s Trump remarks have caused some protest directed at the college, officials there said Monday.

“I wish he hadn’t have said what he said,” Westmoreland said. “For him to follow Martin Luther King like he did, it just seems like it goes against that message.”

Westmoreland said he still respects Lewis and hopes those who are angry with LaGrange College will, too.

“I would hope they wouldn’t consider anything he would say as hate speech,” Westmoreland said.

Speaking to the Republican group, Westmoreland, who now is retired, said he is leaving the door open to run for Georgia governor. In fact, no one will leave him or his family alone about the topic. His wife Joan was recently at the beauty parlor and came home saying she’d been asked if he was running.

“She said listen, we’ve got to decide something about this governor’s thing,” he said.

Westmoreland said he’s waiting for the current legislative session to end and will likely make a decision sometime in April.