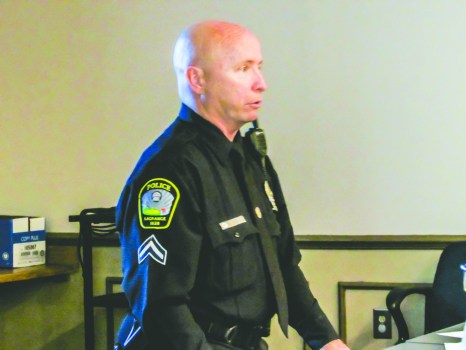 LaGrange Police Senior Patrol Officer Jim Davidson talks to members of the faith community about how to protect themselves and survive during an incident involving an active shooter. (Photo By: Melanie Ruberti | Daily News) 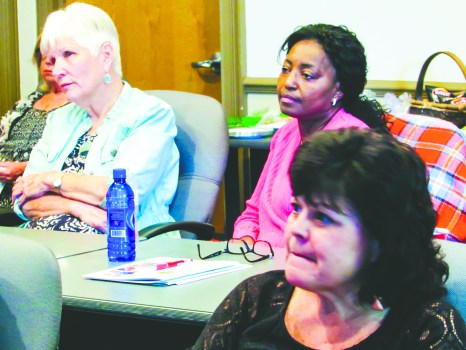 LaGRANGE –  The issue of child sexual abuse still remains a taboo topic of conversation in many churches around the nation – and in Georgia.

Sadly, the abuse is the number one reason congregations ended up in court between 2010 – 2014, according to Twin Cedars Youth and Family Services.

But the organization hopes to change that statistic and start conversations about sexual abuse in churches around Troup County.

Twin Cedars held a Church Safety Summit for members of the faith community and local law enforcement agencies on Tuesday at the Coleman Center off Lincoln Street. The group trained participants to recognize the signs a child may have been abused and how to prevent an incident from happening within their church.

“We hope these churches that are here today will take this information and talk to their congregation members about it,” explained Kim Adams, executive director of the Child Advocacy Center of Troup County. “We hope they’ll use the information to change or shape new policies regarding children within their church.”

The training is from a program called Stewards of Children, also once known as “Darkness to Light.”

Thousands of people in Troup County have taken the class, including all employees within the Troup County School System and members of the Troup County Sheriff’s Office, said Adams. But some of the hardest places to recruit into the Stewards of Children training is area churches, she added.

Rosemont Baptist Church decided to address the issue of child sexual abuse with their staff and members following an incident involving their congregation.

An older child allegedly inappropriately touched another child while riding in a van together, stated Philip McClung, children’s pastor at Rosemont Baptist Church.

According to McClung, the van belonged to “… a person who comes to our church and brings children from his community …”

The victim eventually told someone about the incident, McClung said.

“We (church) already had a lot of policies in place, but we knew we needed listen more and become more educated in the lives of our children,” he added.

More than 70 staff and congregation members of Rosemont Baptist Church completed the Darkness to Light class and became mandated reporters for victims of child sexual abuse.

“At one point I was nervous of the information and details being talked about during training,” McClung admitted. “But the same people I worried would be offended by it, were the same ones who thanked me for giving them a ‘wake-up call’ and showing them the need to keep our children safe.”

Opening up the discussion about child sexual abuse within the Rosemont congregation was one of the best decisions the church made, McClung added.

“People now understand the policies we have in place, such as always having two teachers inside a classroom with children,” he explained. “We don’t live in the same world that we used to. We need to be prepared for things that come up in conversation and be able to respond to them.”

Twin Cedars stated another growing trend in places of worship is church security.

During an afternoon session, LaGrange Police Senior Patrol Officer Jim Davidson taught the group about protecting themselves from active shooters.

“These types of incidents are happening all over the world on a weekly basis,” he said. “The shooters are using firearms, vehicles, explosives and more.”

This type of training is a class Davidson teaches often to the community called Civilian Response to Active Shooter Events, or CRASE.

“I think you’ll see a lot of churches start using security teams,” Davidson said. “Churches need to have these types of conversations … and learn how to respond to an active threat.”

Anyone interested in participating in the LaGrange Police Department CRASE class can contact headquarters at 706-883-2603 or email SPO Jim Davidson at jdavidson@lagrangega.org.

Any church or organization interested in the Stewards of Children training can contact Twin Cedars Youth and Family Services at 706-298-0050.