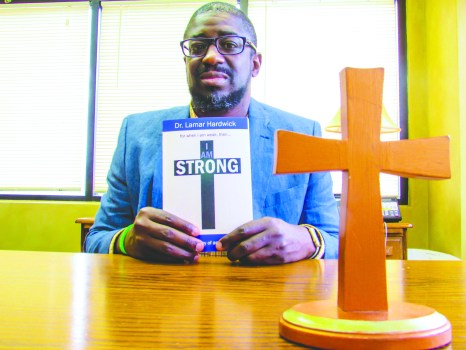 Dr. Lamar Hardwick, lead pastor of New Community Church, holds up his new book "I Am Strong." Harwick chronicled his struggle and achievements before, during and after his diagnosis of Asperger's Syndrome. The book will be on store shelves next week. (Photo by: Melanie Ruberti | Daily News) 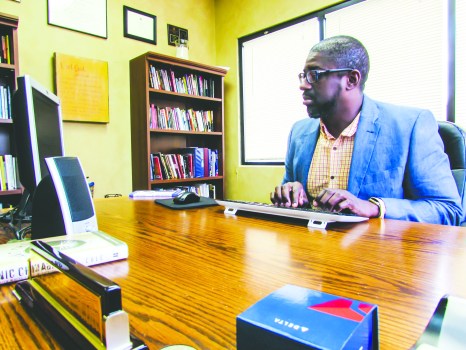 Pastor Lamar Hardwick of New Community Church answers questions about his new book, 'I Am Strong.' The pastor will host a Lunch and Learn about his book this Sunday. The event will also discuss the inclusion of people with Autism and special needs disorders within the faith community. (Photo: File)

But it would be decades before Hardwick would clearly understand why he had sensory issues and trouble with socializing with others.

In 2014, at the age of 36, Hardwick was officially diagnosed with Asperger’s Syndrome, a disorder that is on the “high functioning” side of the Autism spectrum.

The pastor is now sharing his journey of struggle and achievement with the rest of the world in a book titled, “I Am Strong.”

“I wanted to provide people with more than statistics on Autism, I wanted to provide them with stories,” Hardwick explained. “I want to give people a glimpse into what daily life is like for me and how Autism impacts me. I want to bring clarity to family who might be dealing with some of the same issues.”

Hardwick said the title comes from biblical scripture, Corinthians 2:12, when the Apostle Paul described possessing strength despite having “a thorn” in his side.

“It’s okay to have limitations because even when you are weak, you can also be strong,” he explained.

Hardwick lived with limitations for most of his life and endured cruel taunts from other students in school.

“Kids used to call me a ‘robot’ because my voice would never modulate, it just kept the same tone. I never showed any facial expressions,” Hardwick remembered. “I wasn’t good in social situations. I would be at a party, but look like I didn’t want to be there.

“In the back of my mind, I always knew there was something different about me,” he added. “It was like the world was in on a joke that I didn’t get.”

When he was a teen, Hardwick said he turned to drugs and alcohol to fit in with the kids at school.

“Honestly, when I took drugs or had alcohol, it made me more of a people person. I would talk more when I was intoxicated,” he remembered. “But I was trying to be someone I’m not and it got to be exhausting.”

Hardwick briefly dropped out of high school when he was a sophomore.

But the pastor eventually finished school. Hardwick went on to receive a Master’s degree from Emory University in Atlanta and a Doctorate of ministry from the Liberty University’s School of Divinity.

He joined New Community Church in 2010 as the youth pastor. In 2013, the husband and father of three children became the lead pastor of the church.

Hardwick dismissed his lack of social skills until some church members pointed it out to him. Then the pastor read an observation made by a colleague as part of his doctorate program.

“It said, ‘Lamar has a hard time picking up on social cues.’ That was the first time I had heard that,” he stated. “People told me I would walk past them and not smile or speak to them. But I never meant to do it. People would always have to tell me when something was a joke because I took everything very literal. I could never pick up on sarcasm … I always felt like I was missing something.”

Hardwick started investigating his own behavior and visited a therapist. After a series of tests, doctors officially diagnosed him with Asperger’s Syndrome.

The lead pastor disclosed his condition to both his staff and congregation members on March 8, 2015.

“I wanted to be transparent with them,” he said. “I wanted them to know my behavior is not personal and this will be a team effort. I’ve learned what I’m good at and what I am not good at. I concentrate on what I can do and not what I can’t do … like being at a lot of social engagements.”

Hardwick said he relies on his staff to attend some functions. His therapist gave the him some tips to handling large crowds and interacting with people, Hardwick stated.

He also conducts a lot of research and prepares himself before an event, especially a social function.

Hardwick said since he spoke about his disorder to New Community Church, three families told him their teenagers have also recently been diagnosed with Autism.

Hardwick hopes his personal journey will inspire children and families dealing with the disorder.

“I really want to encourage the kids and empower them once they are officially diagnosed. I really want them to maintain a sense of hope,” he said. “Every person on the Autism spectrum is different and all the families are impacted differently … I want them to feel the kind of support and love they need. There are a lot of people trying to work through Autism alone …”

Hardwick also plans to use his book to motivate the faith community in becoming more inclusive for people with special needs.

New Community Church is adding services to accommodate families with children who may have Autism or other disorders, Hardwick said. Staff members have discussed building a sensory friendly room, among other things.

“I Am Strong” will be on store shelves next week.

The book will be available in most retail stores and on websites including Barnes & Noble and Amazon.com.