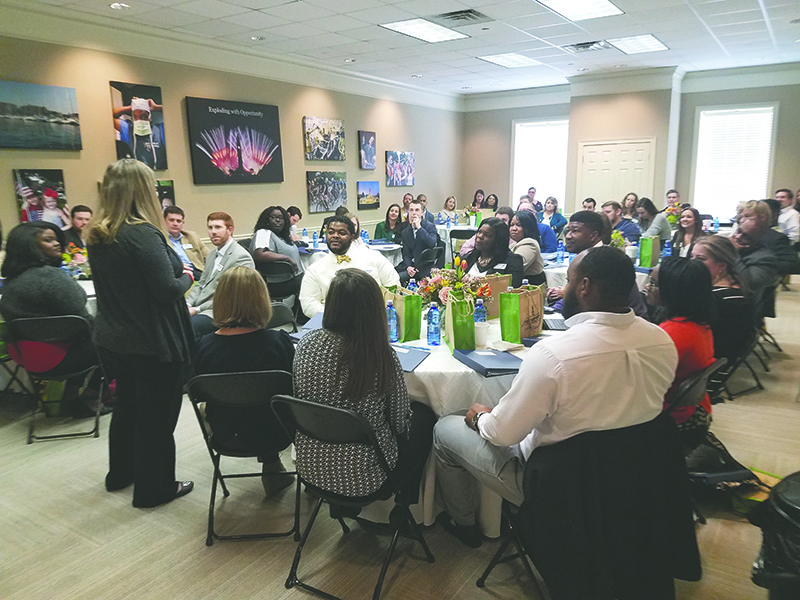 A group of young professionals take part in a meet-and-greet session during the Young Gamechangers meeting on Thursday morning at the Troup County Chamber of Commerce. (James Simpson II | LaGrange Daily News)

LaGRANGE- The Young Gamechangers welcomed 50 new and bright leaders to its 2017 program Thursday morning at the Troup County Chamber of Commerce.

Young Gamechangers was formed by GeorgiaForward, a non-profit, non-partisan organization that works to improve the state of Georgia by engaging business, political, academic and civil leaders to collaboratively shape a statewide policy agenda. GeorgiaForward was developed in 2010.

“We bring young professionals from all different parts of Georgia and have them focus on one community,” said Kris Vaughn, the Executive Director of GeorgiaForward. “We have them identify with challenges that are persistent in that community and we then task the Young Gamechangers to come up with fresh, big, bold, creative ideas to those challenges. A lot of times when you have the same people working on problems at the same time you really need that infusion of fresh ideas.”

The idea for the Young Gamechangers program was sparked by GeorgiaForward, when the non-profit organization started hosting forums and two-a-day conferences every year that brought leaders from across the state (both elected and non-elected) to talk about the future of Georgia in a non-partisan way. In 2012, GeorgiaForward decided to take action and launch the first Gamechangers program.

The 2017 Young Gamechangers class will be the fifth class that GeorgiaForward has put together. The program will run for six months (through June 2). There will be a total of four groups that will consist of 12-13 people in each group. Their main objective is to answer one of four questions that they will receive on different issues going on in that community, with each group expecting to introduce three ideas on that topic. Those ideas will be formulated into a presentation and a 100-page written report they will present in June.

“When the program is complete, each group will have a proposed budget, potential funding sources and recommended partners,” said Vaughn.

The four main areas that will center around this year’s program in LaGrange will be: millennial tourism, industrial development, environmental sustainability and graduate retention.

“Our main goal is to make these recommendations in the community and work alongside the community,” said Vaughn.