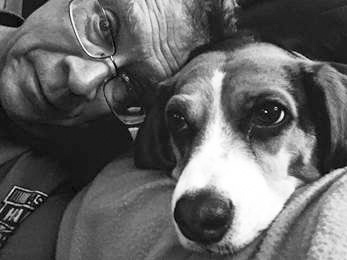 As provost of LaGrange College, David Garrison has been able to hit the “reset” button on life once every semester.

“It’s been rejuvenating,” he said. “You get a fresh start two times a year. You can let go of your mistakes and start again.”

It’s the interaction with students and collegiality of the people he’s worked with the last seven years that Garrison will miss when he retires at the end of this month.

Garrison is moving with his wife, Donna Barger, and four beagles, Charles Darwin, Charles Dickens, Abby and John, to Florida. She is vice president of WeCare TLC, the company that runs the health clinics at Troup County and the college. The home office is in Florida and with his retirement, she can be closer.

“I’ve been in higher education for 40 years,” Garrison said earlier this week. “I felt like it was time.”

Since Daytona International Speedway hasn’t called him with a job offer – NASCAR is a second love – he’s toyed with the idea of returning to teaching, but doesn’t have anything specific lined up once he leaves LaGrange.

“We have loved where we live and the proximity to downtown and the college,” he said.

Garrison will just as quickly talk about his love of dogs and NASCAR as he will the challenges of helping run a small college in Georgia. He and his wife got interested in NASCAR about a year ago when they decided they needed a new hobby.

“It’s a combination of the complexity of physics and the home town mom and apple pie values,” he said. “There’s something fascinating about 40 automobiles going around a track together with 800 horsepower.”

The anthropologist in him appreciates the human stories each driver brings to the race as well as the mechanical aspect. His favorite driver is number 78, Martin Truex Jr., whose story, along with his girlfriend Sherry Pollex’s recent battle with cancer can bring almost a visceral reaction out of people.

Each race day, one can expect to see pictures of Garrison’s dogs on Facebook, cheering the drivers along.

He’s always loved dogs. He and Barger originally moved here with a retired racing greyhound named Medgar Evers. The couple had got the dog when they lived on Signal Mountain, Tenn., near Byron De la Beckwith’s last place of residence.

The dog eventually died and the couple adopted Dickens and Darwin out of a local litter of pups. Darwin became locally famous in LaGrange when he was attacked by a pit bull in his neighborhood while on a walk with the family. Garrison said Darwin fully recovered and is the most laid back of all the dogs. Dickens, who witnessed his brother’s attack, has always been more skittish since that day. The newest dogs, Abby and John were added a few years after the incident.

When Garrison was in college, he didn’t set out to be in higher education. He didn’t even think about grad school until, as a student at Appalachian State University, a professor asked him which one he’d be attending.

That led him getting his master’s degree at Baylor University and his doctorate at the University of Minnesota. Then he started teaching.

“I loved to read and write and to talk about those things with people,” he said.

Teaching for that many years has in many ways kept him young. He started with his first class when he was 22; his students were just 18.

“It’s a pretty lucky life to hang out with 18 to 22 year olds all day,” he said. “They’re young people. They’re just figuring things out and they’re full of questions and wrestling with ideas.”

He came to LaGrange after serving as dean of the College of Arts and Sciences at Georgia Southwestern State University in Americus.

Before assuming his post at Georgia Southwestern in 2006, Garrison served as associate dean of Georgetown University’s McDonough School of Business from 2004. While at Georgetown, he was responsible for broadening the business student experience, including study-abroad opportunities and language study.
Prior to that time, he was head of the Department of English at the University of Tennessee at Chattanooga from 2001.

As provost at LaGrange, Garrison has been able to continue teaching. The college offers a Cornerstone class for incoming freshman that he taught four years. He recently took that class, which will graduate this spring, out for lunch at iHOP for their “final exam.”

He’s also been responsible for hiring about 50 percent of the college’s current faculty, which he believes will be the biggest part of his legacy he leaves behind.

“We’ve been fortunate to hire good people in the last seven years,” he said. “I feel good about the people we’ve brought here and I think they’ll make a terrific impression on the culture here at the college.”

He’s also responsible for staging each commencement ceremony, which led to some extra challenges in the spring of 2013. The college has always been able to work around a little rain – it is spring in Georgia, after all – but it had poured overnight, soaking the quad, and was expected to rain again during the ceremony.

At almost the last minute possible, the decision was made to move the ceremonies, which would need to be split into two groups, inside Callaway Auditorium. That had never been done before.

“It was surreal to be there (for the second ceremony) and think ‘Didn’t I just hear all this two hours ago?” he said.

But it was the right call. Halfway through the first ceremony, the sound of thunder could be heard inside the building.

“It just poured and poured,” he said.