Brown: Reflections on an inauguration 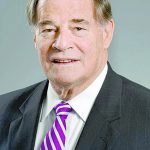 The most unlikely of all presidential inaugurations happened Friday, January 20, 2017, when Donald Trump became our 45th president. I spent hours in front of the TV watching most of the inaugural activities, filled 14 pages with notes, Googled a lot to verify facts and reflected on experiences my wife and I had at another inauguration before writing this article.

As has been the practice since 1933, Inauguration Day started with a private church service for the Trumps and Pences and 300 invited guests at St John’s Episcopal Church.

Next, the Trumps were invited by President Obama and the Pences by Vice President Biden to a coffee at the White House. From all appearances the Obamas and Bidens were very cordial epitomizing our peaceful transfers of power since 1801. In this present age with hyper changes the traditions of inaugurations are reassuring.

The swearing in ceremony went according to script and precisely at noon Chief Justice Roberts administered the oath of office to President Donald John Trump.

I must admit that even after the election, when Trump carried 31 states and 306 electoral votes versus Secretary Clinton’s 232 I was very concerned that we would not see Trump receive that oath on Jan. 20th. Starting right after the votes confirmed Trump the winner rioting in the streets began and smacked of anarchy. The press, Hollywood and academics were engaged in a full court press to deny him the presidency. There were recounts but his lead increased. There were furious efforts to get the electors in the 21 states where they were not bound by the majority vote of their state who convened in their respective state capitals Dec. 19  to change their votes. This effort was yet another defeat for the “Never Trump” ilk because he only lost two electors while Clinton lost five.

Next was a revival of the charges that Russian hacking influenced the election in favor of Trump. In reality this showed how poor our cyber security is and once again reminded us of attempts to rig the election by the Clinton camp; think Donna Brazile giving Clinton debate questions, their actions against Senator Bernie Sanders in the primaries, etc.

I was impressed that all of the former living presidents and their wives, except former President George H. and Barbara Bush who were both in the hospital, were there. Remembering that Trump ended the “Bush Dynasty” when he defeated Jeb in the primaries it was probably hard for George and Laura Bush to be there. However, that paled in comparison to how difficult it must have been for Secretary Clinton to be there. Nonetheless they and the Democrat senators and congressmen in attendance realized their responsibilities and respect for this celebration of democracy were far more important than their petty differences! Further as John Kennedy said at his inauguration, “we observe today not a victory of party but a celebration of freedom.” The foregoing are things the 67 Democrat Congressmen who did not attend failed to honor!

Next was the inaugural speech by Trump which received rave reviews and poor reviews depending on the reporters/commentators biases. I liked the title some gave it “The Forgotten Man Speech.” I also think the comparisons of Trump to Andrew Jackson and Teddy Roosevelt are worthy of consideration.

In my opinion Michelle Obama was an effective First Lady. Going forward First Lady Melania Trump is only the second First Lady born outside of the United States. Her family background, living in a number of countries and speaking five languages should result in her being very helpful to her husband especially in foreign relations.

After bidding the Obamas goodbye as they boarded a helicopter there was a non-partisan lunch at the capitol with hundreds of elected and appointed federal officials. Also Trump signed several procedural Executive Orders plus one as part of the repeal and replacement of Obamacare. Later Pence swore in the only two cabinet level appointees approved by the Senate an hour before. Note that on this day eight years ago the Senate had already approved six of Obama’s nominees.

The parade was pretty typical of prior ones, but this one had the taint of groups wanting to participate being pressured not to do so. A notable exception to caving to this pressure was Talladega College (a predominately black college in Alabama) Marching Band. It needed $75,000 to make the trip but thanks to their president appearing on Bill O’Reilly’s show and the GoFundMe website they raised $672,818!! I expect to see a lot more of such repudiations of old ways of thinking.

Unfortunately I can’t ignore many efforts to disrupt the inauguration,collectively called “Disrupt J20.” The most despicable were hundreds who appeared to be mostly whites setting fires, throwing rocks through store windows and injuring police officers. Approximately 230 were arrested and most have/should be charged with felonies. I hope they get maximum jail sentences!

Since 1933 a prayer service is held at the National Cathedral the day after the inauguration. This brought back memories of attending my Christian hero Chuck Colson’s funeral at the same church and with pretty much the same liturgy. The President gets to choose those offering prayers and Trump selected ministers from all of the major religions including a Muslim. This marked the last of the inauguration activities which began Thursday with a “Deplora-Ball;” get the reference?

The service had a very appropriate hymn with the lyrics “Let there be peace on earth and let it begin with me,” words we all need to heed!