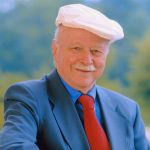 After a long and fruitful life of community service, John Thomas “Tom” West passed away January 23, 2017 in LaGrange.  Tom was born in Live Oak, Florida on June 23, 1924 to Dr. James Whitaker West and Lela Eulalia Moore West.  He attended Suwanee High School in Live Oak, but graduated from MacBurney School in New York City in 1942. Pre-med studies at University of Michigan were temporarily interrupted by conscription into the US Navy where he served in the medical corps.  After graduation in 1946, he spent a year working as a parasitologist for the Florida health department, where his supervisor was Ruth Blakely from Seattle, whom he married in 1948.  He graduated from Vanderbilt Medical School in 1951.

Following internships in US Public Health Service hospitals in Seattle, Mobile, and Detroit, as well as on the Coast Guard cutter ‘Campbell’, he returned to Seattle to complete a surgical residency.  In 1957 the family moved to Anchorage, Alaska where Tom served as chief of surgery in the USPHS hospital there. He frequently was called upon to travel by sea plane to perform needed surgeries in remote Eskimo villages, some of which were north of the Arctic Circle.  In 1960 he was appointed Senior Investigator for the National Cancer Institute at National Institutes of Health in Bethesda, Maryland, where he studied cancer treatment options.   In 1963, the family returned to Seattle, where he practiced surgery at the USPHS hospital for 6 years during which Tom volunteered for a 3-month stint providing needed surgeries for injured Vietnamese civilians.  In 1969 he took a position at the USPHS Indian Hospital in Phoenix, Arizona, which often entailed trips to remote reservations.

In 1971 Tom retired from the Public Health Service and went into private practice in LaGrange, where he practiced general surgery and oncology with Dr. Madhav Naik.  Except for three years in Lubbock Texas, he lived and worked in La Grange until his retirement in 1994.

Tom was an avid runner, helping to organize, “The Long Cane-Gabbettville ‘Run for the Kudzu’ Road Race” and “The Best Dam Race in Georgia”, at West Point Dam, raising funds for charities. He joyously participated in many 10K races in Atlanta, Macon, Columbus and elsewhere.  For the ’96 Olympics he was one of the runners chosen to carry the Olympic torch for a portion of its route to Atlanta.  At age ninety, he became the oldest member of the Towne Fitness Center, where he worked out several times a week.

Tom was a life-long lover of music. One could count on hearing music in the house, or in the car, or walking down the Medical Center hallways, or in surgery.  He would either be playing recordings of some of his favorites or singing one of the hundreds of songs he kept in his memory.  In his 70’s he took up the guitar, and enjoyed writing and playing songs for and about his friends and family.

He sang in the choir at The First Presbyterian Church where he was a long-time member.  He also served as an elder, adult Sunday school teacher, lunch program volunteer, was a vocal participant in the men’s Bible Study and was on the examinations committee for the Presbyterian Church USA.  He donated his time and medical skills, traveling three times to Presbyterian missions in Zaire, and provided medical assistance by giving physical examinations to campers at Camp Viola in Troup County.

Tom actively supported several civic and educational organizations, including the American Red Cross, Twin Cedars, the LaGrange Symphony, LaGrange College, Sierra Club, Retired Military Officers Association, and community clinics.  He compiled and published, ‘For Love of Country’, a book detailing the lives of Troup County soldiers from the Civil War up to the present.

Please join the family in honoring the life of John Thomas “Tom” West, by visiting www.hunterallenmyhand.com and posting your tributes and memories.   Arrangements are in the care of Hunter-Allen-Myhand Funeral Home, LaGrange.