Preparing for the storm 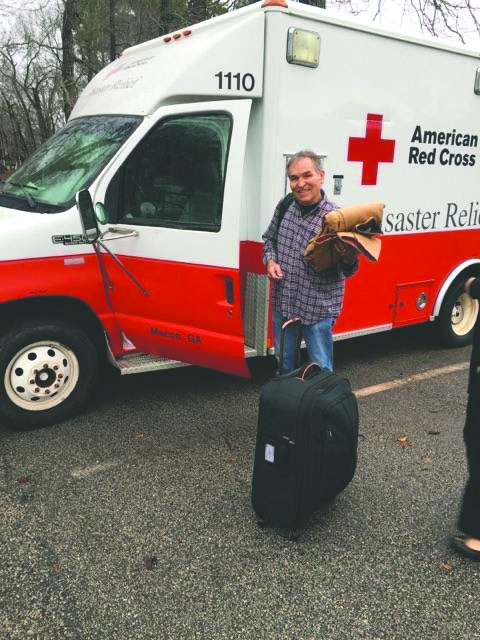 Tom Bulifant prepares to pull out of the American Red Cross parking lot off Dallis Street Monday morning in the Emergency Response Vehicle, or ERV. Bulifant, a volunteer with ARC, was deployed to South Georgia to help residents affected by the tornadoes over the weekend. (Photo: Submitted)

Preparing for the storm

LaGRANGE – People in three south Georgia counties had little to no warning as severe thunderstorms and tornadoes slammed into their neighborhoods early Sunday morning.

Fifteen people died and dozens more were injured as those storms slammed into Cook, Berrien, Brooks and Dougherty counties, according to officials with the Georgia Emergency Management Agency. Hundreds of residents and homeowners lost everything or experienced some sort of damage to their residence, officials added.

One of those volunteers was Tom Bulifant.

He headed out to Tifton early Monday morning driving the American Red Cross Emergency Response Vehicle, or ERV. In Tifton, Bulifant said he would learn where his services were needed the most.

“The Emergency Response Vehicle is primarily used to go in and serve food and supplies to people in the affected areas,” he explained. “… We also use it to move pallets of water around and for disaster assessments as we go through the neighborhoods.”

Bulifant has volunteered with the American Red Cross since November 2013.

“I was in Albany a few weeks ago when the tornado touched down, so for them to get hit again is pretty devastating, he said. “I do this … to give humanitarian assistance and get people back on their feet.”

Bulifant said he will be deployed with the American Red Cross a minimum of one week, but could be gone as long as two weeks.

While it is rare for tornadoes to strike the south in January, having a plan in place for any disaster is a good idea, said Connie Hensler, executive director of the American Red Cross of Central Midwest Georgia.

“You need to have a family plan for a tornado, fire, any type of a disaster. Discuss, what would we do? Where we would we go? If you had a fire, discuss evacuation routes and a meeting place once everyone is out of the house,” explained Hensler. “For storms, find out where is the safest place in the house. Do you have a basement? Do you have a hallway in the middle of your house? Then practice your plan … so you’re more inclined to execute it quickly.”

Wynn placed her family’s emergency kit in the hallway of their home the night before severe storms slammed into Troup County this weekend.

“The kit we had with us had non-perishable foods, waters, flashlights, batteries … extra clothing, toothbrushes and toiletries,” she explained. “I have children, so I have books in there and coloring books to keep their minds off things. They get upset at first, but I remind them this is why I practice this.”

“Include copies of important documents that you might need like driver’s licenses, social security cards and birth certificates and put them in in a safe place or fire proof box, she said. “Also remember to have non-perishable foods and water on hand. Maybe you won’t be affected by the storm but you lose power for several days. Having those items on hand will be helpful.”

Staying informed during and after severe weather is also important, Hensler added.

“Listen to your NOAA Weather radio and local law enforcement. Find out if you need to evacuate or stay inside,” she stated. “If it’s not safe to go back home, don’t go back home. Just pay attention and stay aware.”

The American Red Cross has free apps for your phone that will alert you when severe weather, tornadoes, hurricanes, wild fires and more are heading your way.

“They (apps) will also tell you where you can find local emergency shelters too,” said Wynn.

The apps can be found on iTunes or in Google Play stores.

The American Red Cross is always in need of more volunteers. Financial donations are appreciated as well.

Anyone wishing to volunteer, donate, or learn more about creating an emergency kit, visit redcross.org or call the local office at 706-884-5818.