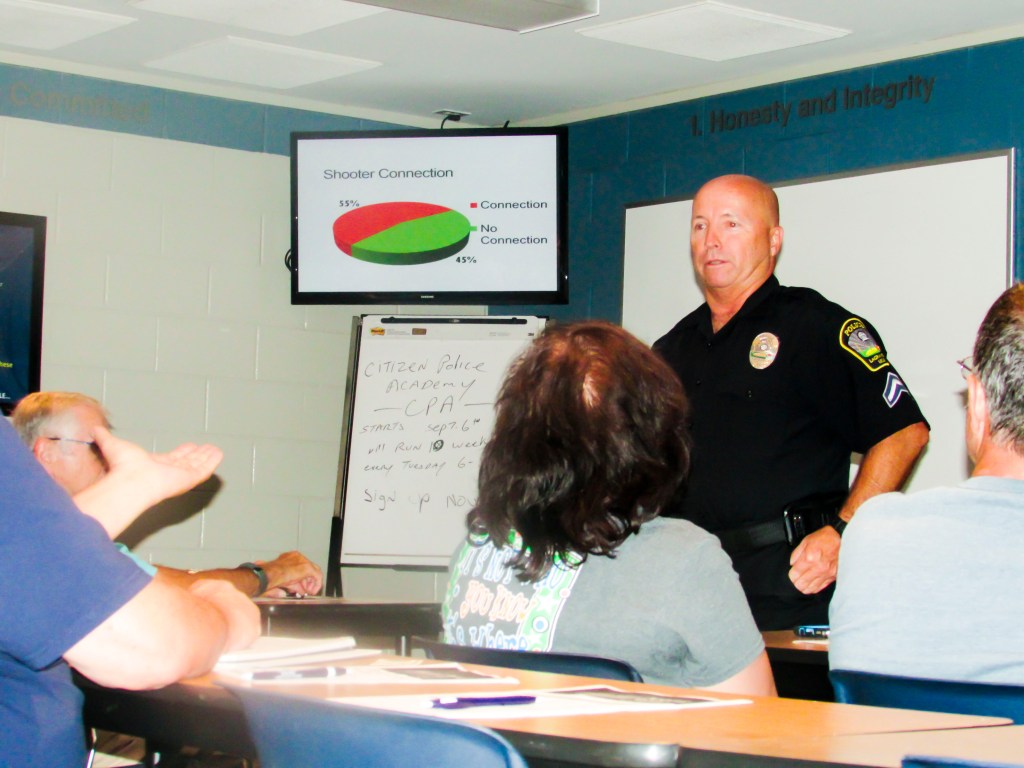 LaGrange Senior Patrol Officer Jim Davison answers a question from the crowd at the Civilian Response to an Active Shooter Emergency class (CRASE) last year. It was the first time the training session was open to the public.

LaGRANGE – The LaGrange Police Department will arm folks with information should they find themselves in an active shooter situation.

The department is holding its third annual Civilian Response to Active Shooter Events class, or CRASE, on Monday.

“We want to educate people and tell them what they should do if they find themselves in an active shooter situation,” said Sgt. Marshall McCoy, with LPD’s Community Outreach Unit. “… More people are traveling and attending major events, such as the NFL playoff games, or even if you’re just going to the grocery store. People need to know what to do. The more you prepare people, the less targets you will have during an incident.”

LPD Senior Police Officer Jim Davison and Lt. Eric Lohr, head of the LaGrange Police Department’s training division, typically teach the CRASE classes to the public and to private organizations such as area schools and businesses.

The average time a suspect is actively shooting in a building is typically less than three minutes, the officers said.

The average police response time to an incident is usually three minutes or more, the officers added.

“What you do in the first few minutes of an active shooter situation before law enforcement arrives will ultimately have the most influence on the final outcome,” explained Davison during a CRASE class in September.

It could mean the difference between life and death for victims trapped in the shooter’s cross hairs.

“Would you freeze? Would you run? Would you hide? The class prepares you mentally for what you should do, what your options might be and what option could be best for each situation,” explained McCoy. “We want to provide as much prevention and education on the front end before there is potential problem.”

Davison and Lohr teach people the avoid, deny and defend method, or ADD. This shows folks how to always be aware of their surroundings, have an exit strategy, create barriers and remain silent if a threat is near. But people must also be prepared to defend themselves and commit to their actions if confronted by an armed suspect, Davison and Lohr said during the September CRASE class.

“We want people to know they can survive an active shooter incident,” McCoy added.

So far, the LaGrange Police Department has received a good response from those who have taken the CRASE classes.

“They seem to enjoy it,” said McCoy. “It enlightens them. We don’t have any problem filling up any of the classes. As long as the classes are needed and there is an interest, the police department will continue to hold them.”

There is still time to sign up for LPD’s next CRASE class. The training session will take place Monday. The class starts at 6 p.m. and will be held at LPD’s training center located at 376 Aerotron Parkway off Lukken Industrial Drive.

Anyone who is interested in CRASE can email SPO Jim Davison at jdavison@lagrangenews.com.