West Point’s got something brewing 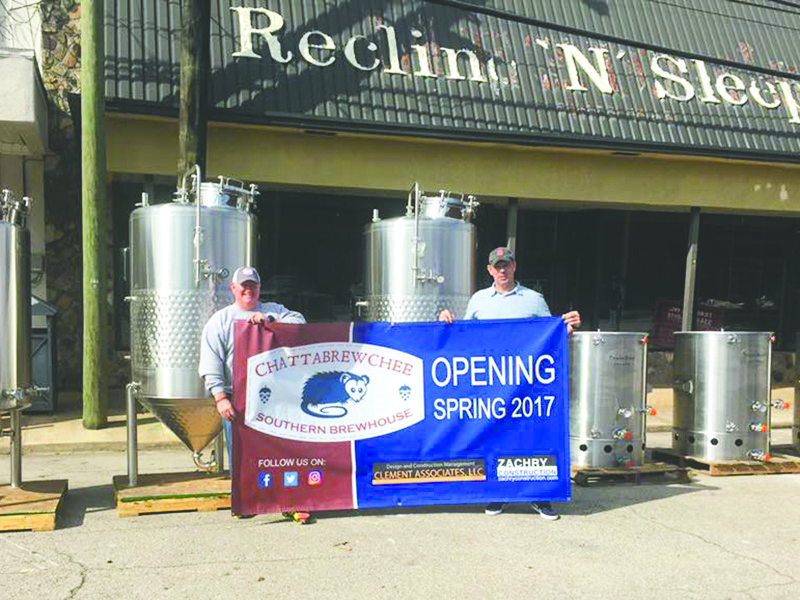 Brewmaster Barry Stephens and co-owner Michael Denehy stand in front of the future home to Chatt abrewchee Southern Brewhouse in West Point with some of their brewing equipment. (Submitted)

WEST POINT – Troup County promises to really get hopping this summer with the announcement of a brewery scheduled to open in West Point in June.

U.S. Army Veteran and Valley, Ala., native Kathy Thomas Denehy is excited to be opening a brewery with her husband and fellow veteran, Michael, who will finish his last tour just in time for the brewery’s grand opening.

“Not all companies use 100 percent U.S.-made steel, and the companies that we’re dealing with, they definitely do that,” said Stephens.

The business also promises to continue the trend of growth and improvement in downtown West Point by repurposing the building that was formerly the Recline ‘N’ Sleep Plus furniture store as the location of the brewery. All of this, though, is part of what they describe as their continued service to the area and the country.

“We’re service-oriented people who have spent a combined 61 years in service to our area and our country,” said Michael Denehy.

The brewery plans to start off with three different beers and expand their selection as demand allows.

“They are all generally light and drinkable,” said Michael Denehy. “… We are tying everything back to the community.”

Those ties include naming their India pale ale, Ale 706, after the area code, and naming their blonde beer Backwater Blonde.

“Probably the most popular brew as far as I brew them is the blonde ale,” said Stephens. “I’ve won several medals at different homebrew competitions with all three of those beers, but the blonde has won the most medals out of any of the three.”

The beers have done well in competitions like the one at Macon Beer Fest where the blonde beer came in first overall in the lite beer category. The brewery also plans to produce a German wheat beer called Raspberry Hefeweizen. The owners hope to make all three beers available throughout the area.

“Our intent is to be on tap in four areas,” said Michael Denehy. “West Point and Valley, Pine Mountain, LaGrange and in the future, we’d like to get out to the Auburn University area, though we aren’t quite ready for that yet.”

The owners plan to focus first and foremost on the beer, but they have not ruled out the possibility of hosting tours and events at a later date. They are excited to be located near LaGrange’s Wild Leap Brew Company as they hope the breweries will encourage more beer drinkers to come visit both breweries and get to know the area’s craft beers.

“It’s a passion, and we know it’s going to take a lot of hard work, there is no doubt,” said Stephens. “And the brewery coming to LaGrange, that is exciting for us as well. … (Craft breweries) don’t really look at each other as competition because the way we look at it is, if we’ve got some guys up the road that are doing well, that is just going to help us do well also.”

To learn more about Chattabrewchee Southern Brewhouse or get their latest updates, check their Facebook page at https://www.facebook.com/chattabrewchee/

Cleaning off the bad paint