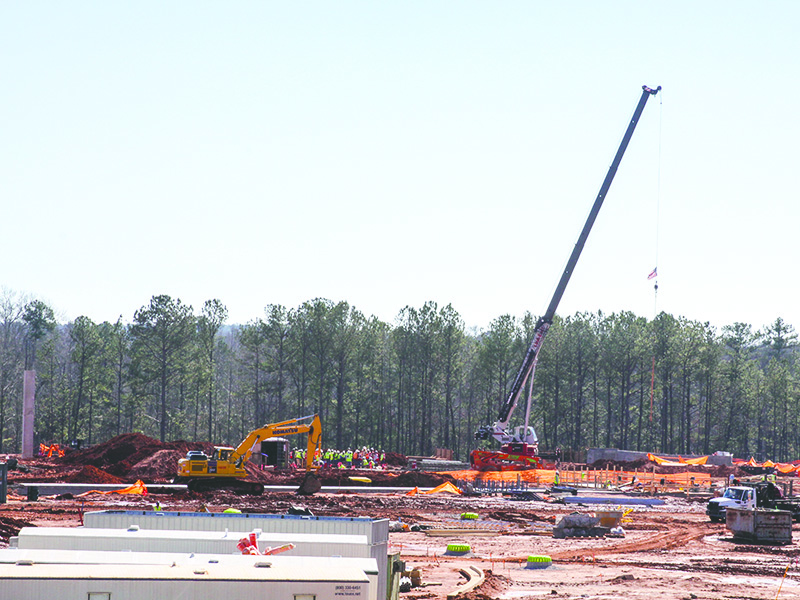 Construction on the Great Wolf Lodge is currently on schedule with the resort expected to open in May 2018.

LaGRANGE – The city council received an update on Great Wolf Lodge and the adjacent conference center’s construction at their regular work session on Tuesday and were able to get clear answers to a few of the questions that have come up since the project was first announced.

Great Wolf Lodge is on schedule to open in May 2018 if construction remains on schedule, even though much of the work completed so far is not readily visible from the road.

“It’s going to move very quickly for us in the next couple months,” said LaGrange’s Economic Development Director Mike Criddle. “… What you see in the ground right now is not a lot. It is hard to see anything particularly from the interstate and Whitesville Road, you don’t see a whole lot because… everything is underground. All the storm (drains), all the sewer (systems), all the water, gas electricity – all of that – all of the infrastructure components are going in the ground as we speak.”

When completed, the resort will be a total of 491,000 square feet, with 456 hotel rooms and a 11,000-square foot ballroom adjacent to the main lobby. City officials have stated previously that they hope that the resort will bring more business to the area in the form of both new stores opening near the resort and resort guests shopping at local businesses.

“This whole thing is going to bring people here from out of town, and they’re going to go to all these other businesses here,” said Councilman Willie Edmundson. “The shopping and this Great Wolf are going to come in – and we’ve been trying to get big box stores like Dillards and things – this is going to (help with that).”

But even with the construction of the facility, efforts are being made to help the local economy and use local companies as much as possible.

“They are using a lot of (our local businesses),” said Criddle. “… One time I drove over there and there were 11 concrete trucks all from Troup County, down there pouring concrete.”

According to Criddle, this is a common occurrence at the construction site that is currently looking for other skilled tradesmen to help with the next stages of construction.

One of the biggest complaints from locals about the park since its initial announcement has been the exclusivity of the water park section to hotel guests, but LaGrange Mayor Jim Thornton pointed out that the cost of a room with full park access costs a similar amount to what it would cost to go to many Atlanta attractions.

“If you’ve got a family of five, and you want to go up there for $150 on a Tuesday night get a room or whatever, that’s a lot cheaper than buying five tickets to White Water,” said Thornton. “And you don’t have to drive.”

“If you stay there for a night, you can check in early and enjoy the waterpark as of 1 p.m. that day, and then the day that you check out – even though you check out of your room – you have access to the waterpark until they close that night,” said Josh Storey, the Stantec project manager over the conference center’s construction.

Special offers can also lower the cost of going to the resort, like the park’s Howling Heroes offer which is currently listed on the resort’s website and offers a 30 percent discount to active and retired military, fire, emergency medical service personnel, police and correctional officers who present a valid ID at check in. According to a Great Wolf customer representative, the offer is regularly available, and should still apply when the resort opens in LaGrange.

With that pricing, it would only cost about $30 more for a family of four – without discounts – to go visit Great Wolf for a day and a half at the waterpark – including a room which could be used as a place to store things like extra towels even if the guests decide to return home after a long day at the park – than it would cost for a day at the Atlanta attraction.

The resort is also expected to have specials that would discount the tickets during slow times like weekdays and winter as well.

A major part of the visible progress that officials expect to see this year is on the conference center that the city will own and lease to the resort.

“The city council has wanted a conference center (for a long time),” said Thornton. “That’s something that has been on the wish list… for 20 years.”

According to project managers, the conference center at the resort will be roughly double the size of the Callaway Conference Center at West Georgia Technical College. The Great Wolf Conference Center is expected to hold 1,500 or more people if set up for auditorium seating or approximately 1,100 people for a banquet.

The center is also set to have several smaller meeting rooms, an outdoor space and areas for support staff such as caterers. It will be accessible from the outside without having to go through the hotel, so while hotel guests could get to the conference center through the hotel, people attending conferences and staying elsewhere would not have to go through the resort’s hotel space. In fact, the team over the project expects for people attending conferences at the resort to frequently choose to stay at other local hotels the area for either cost savings or space considerations.

Planners have checked into how often the conference rooms at other Great Wolf Resorts were used and were happy to find that they tended to stay booked during the “warmer months” with groups ranging from business conferences to cheerleading competitions.

The conference center plans show it matching the rustic theme of the resort without being as branded as areas like the hotel and waterpark will be.  According to the Stantec team, the conference center will also have acoustically rated dividers to ensure that speakers can be clearly heard in their section of the ballroom – but not throughout the ballroom – when multiple conferences are going on in the subdivided spaces at the same time.

Not just for the guests

Great Wolf is also set to feature several restaurants that will be open to the public including a steakhouse, pizza place and a coffee shop.

“They have a couple of different style restaurants that will be open to the public,” said Storey. “So, it is a place where you could go have dinner and take the family without being a guest of the resort.”

According to people involved in the project, there should be separate parking available for people who want to eat at one of the restaurants without having to park in the hotel parking and go through the hotel lobby, and the resort will also have several stores that will be available to the public.