‘He finally has a voice’ 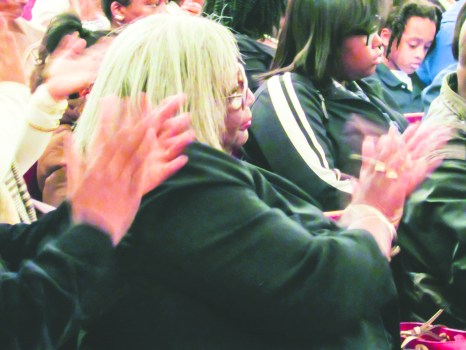 Deborah Tatum, a distant relative of Austin Callaway, listens intently to city leaders as they acknowledge and apologize for the African American teen's kidnapping and brutal murder in Sept. 1940. The teen was reportedly taken from LaGrange Police custody by a mob of armed, white men, driven to Liberty Hill Road, shot multiple times and left to die. (Photo By: Melanie Ruberti | Daily News) 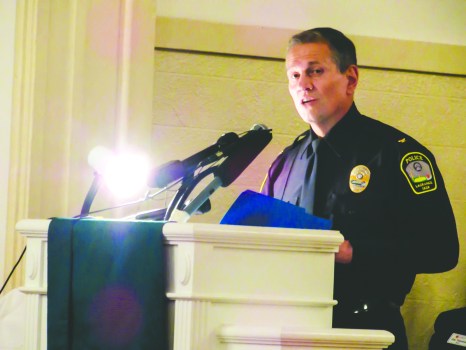 LaGrange Police Chief Lou Dekmar acknowledges the department failed to protect Austin Callaway while he was in police custody in the 1940's. Dekmar hopes the event will open communication and heal wounds within the community. (Photo By: Melanie Ruberti | Daily News) 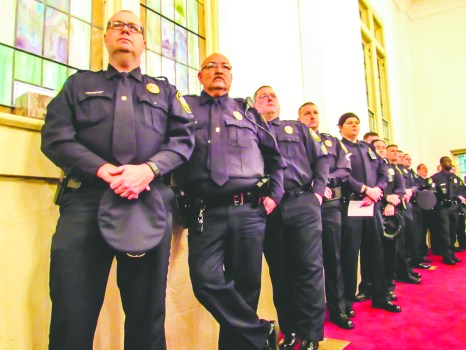 The men and women of the LaGrange Police Department stand united around the sanctuary of the Warren Temple United Methodist Church Thursday night. (Photo By: Melanie Ruberti | Daily News) 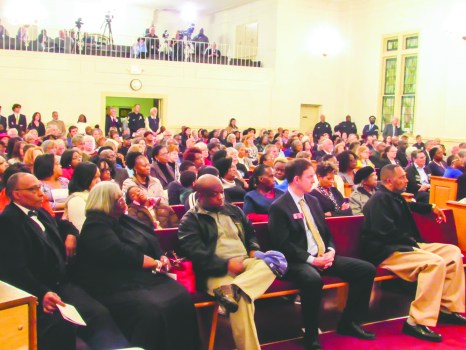 The sanctuary of the Warren Temple United Methodist Church was packed to capacity during a special service to honor and remember Austin Callaway, 18. Callaway, an African American teen, was kidnapped and murdered while in police custody on Sept. 7, 1940. (Photo By: Melanie Ruberti | Daily News) 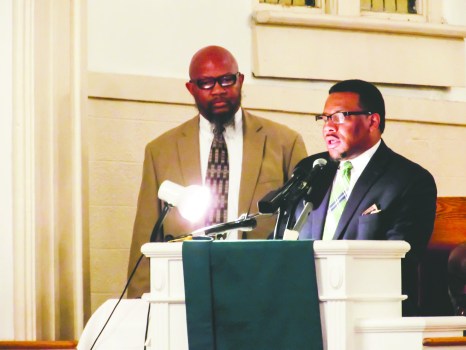 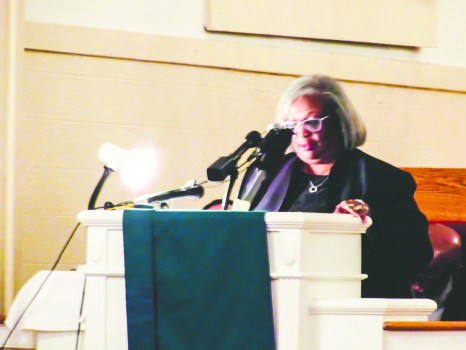 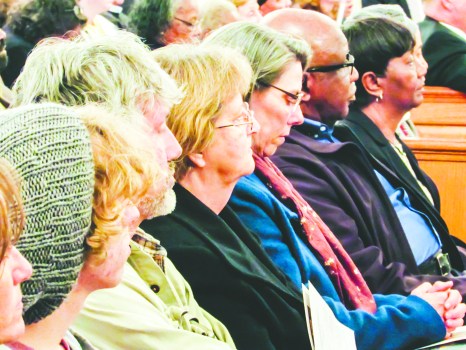 Dozens of residents came together to listen to the story of Austin Callaway and honor his memory inside the Warren Temple United Methodist Church. (Photo By: Melanie Ruberti | Daily News)

‘He finally has a voice’

LaGRANGE –   There were no empty seats inside the Warren Temple United Methodist Church Thursday night.

A dignified, yet somber line of LaGrange police officers formally dressed in uniform stretched around the inner sanctuary.

The atmosphere was enthusiastic and solemn, peaceful and determined as residents gathered for a service of remembrance for Austin Callaway, 18.

The African-American teen was arrested by LaGrange police officers on September 7, 1940, for allegedly assaulting a white woman. After his arrest, Callaway was jailed in the basement of City Hall.

Later that same night a mob of armed, white men reportedly removed the teen from his cell – and the custody of LaGrange police.

The men drove Callaway out to Liberty Hill Road, shot him several times and left him to die, according to the Troup County NAACP, LaGrange Public Safety Chief Lou Dekmar and members of Troup Together, who now have looked into what happened.

The incident was given little press coverage in Georgia. No investigation into the teen’s death was ever conducted.

“Let me say this emphatically: justice failed Austin Callaway in 1940,” said LaGrange Mayor Jim Thornton. “… Tonight is not just about a place, but another time – 1940. The threat in the 1940s is still a threat to us today … and until we have a full, complete acknowledgement of the past, we can never fully heal.”

Family members of Austin Callaway sat on the front pew, gracefully accepting the condolences and acknowledgement of the teen’s brutal murder..

“It’s exciting to know that he finally has a voice,” said Deborah Tatum, a distant relative of Callaway. “The family is speaking for Austin today. He has a voice. But there’s still a lot of things we don’t know.”

Tatum’s grandfather and Austin’s grandfather were cousins. She learned about the teen’s death three years ago while doing research for a family reunion.

No one in her immediate family had ever heard Callaway’s story until that day, Tatum remembered.

“It’s been exciting and educational to learn about Austin,” she said. “It’s always good to know your family’s history.”

Callway’s death was historical in some ways to the community. His murder is what created the Troup County branch of the NAACP, said president Ernest Ward.

The teen’s death was also the catalyst to define the word “lynching” and pass legislation against it, Ward added.

“I’m excited about this service for Austin. His name was erased from history,” Ward said. “It’s just not an honor for him, but an honor for God because we are showing the significance of this nation being built ‘under God.’ Hopefully when I wake up tomorrow we will be one step closer to achieving the missions of the NAACP and the Troup County trust building initiative.”

Building trust and race relations is something author Karen Branen hopes for as well.

She flew down from Washington D.C. to attend the remembrance service for Callaway.

Branen outlines her family’s shameful secret past as part of a white lynch mob decades ago in Harris County in the book “The Family Tree.”

The author was excited and intrigued when she learned about the city’s public acknowledgement.

“This is one of the happiest days of my life,” Branen said. “… These are very brave men and women to do this. I think it will pay off handsomely for the community. I wanted to be here for this historic occasion. It’s momentous.”

Meanwhile, Tatum hopes Callaway is eventually not remembered for his brutal kidnapping and murder but for how he positively changed a community –  even in death.

“You want his name to be greater than this. We want to celebrate his life,” she said. “… But we have to learn how to forgive and love one another before we can move forward. No matter the race, faith … this service will open the doors of communication and let us talk openly with one another … and bring peace to our community.”

A historical marker for Austin Callaway will be dedicated on March 18.

The place and time has yet to be decided.