‘Mr. Fred’ is safe and warm 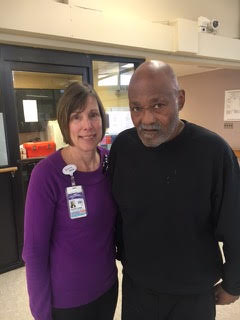 On a recent January evening, when temperatures plunged into the teens and ice and snow were in the forecast,  about 20 men, women and children slept under donated blankets on simple cots in the new warming center operated by the Troup County Homeless Coalition.  Each had been welcomed to the New Ventures facility at 150 Lukken Industrial Drive, fed a hot meal and offered a chance to shower.

That wasn’t always the case.

Across town on that same bitter night, a sweet-faced, 62-year-old LaGrange man also slept comfortably in a warm bed, his stomach full, his medicine taken, his personal needs met.

That, too, wasn’t always the case.

That man is Fred Patillo, for many years a familiar figure in downtown LaGrange.  An Air Force veteran with significant health issues, Patillo regularly roamed the streets around Lafayette Square, enduring the elements – rain, cold and worse – as well as the deprivations that come with life on the streets.

There is no direct connection between Patillo and the new warming center — no such resource was available back when he needed it. Warming center leaders say that’s exactly the point.

“If Fred could have had a warming center, with people to point him in the right direction, he might have gotten the help he needed years ago,” said Ida Russell, a volunteer with the Troup County Homeless Coalition.

“We believe Fred’s story is a story of hope,” Russell said. “Hope for him and hope for others.”

Patillo grew up in LaGrange and attended East Depot High School, where he was a linebacker on the football team.  He joined the Air Force, spending about 18 months at Lackland Air Force Base in San Antonio, Texas, where his duties included fueling the massive C-130 cargo planes. His warm brown eyes light up when he’s asked about it.

Returning to LaGrange after the military, Patillo owned a home at one point, but as his health problems mounted, it fell into disrepair and eventually passed into other hands. Downtown LaGrange became his “address.” His bedroll and simple belongings became a regular sight for those passing the old post office building on Church Street.

Patillo’s behavior was often odd, but never violent. He has no criminal record. Many downtown workers looked past his obvious troubles and saw a gentle, friendly man. They called out greetings as he made his rounds.  Sometimes they offered food, warm clothes, a little money to supplement his disability income.

“Everybody downtown knew Fred, and many people wanted to help him, but just didn’t know how,” said Russell.

Then one day, Patillo disappeared. No one saw him for days, then weeks and months.

Many worried about him, fearing the worst.

One of those was Russell.

“I was afraid he’d died,” she said.  “I asked and asked about him, but nobody knew.”

Finally, news came. Patillo was not dead. He was, in fact, alive and doing better than in a long, long while. A trip to the hospital, where he was treated for serious physical illness exacerbated by his lifestyle, had resulted in a referral to Twin Fountains.

Administrator Mary Jane Cleveland, herself a military veteran, said she felt an immediate connection to Patillo.

“Some people were wary of him, but I told them he just needs to be cared for,” she said. “If you can connect with people and get them going in the right direction, things usually work out.”

Not one to give his trust easily, Patillo bonded with Cleveland in a way neither could have anticipated.

“She talks to me straight,” he said.

His daily routine, while simple, satisfies him, he said. He usually sleeps late and eats breakfast in his room, then watches TV or sits in the commons area. He looks forward to days when his favorite cheeseburgers are on the menu and keeps up with his favorite football team, the Atlanta Falcons.

“Fred interacts well with staff and gets along with his roommates,” Cleveland said. “He is quiet, somewhat solitary, but very observant. He knows what’s going on.”

Denna’ Muncy, who chairs the Troup County Homeless Coalition, doesn’t know Patillo, but she has seen the same caring spirit in the multiple agencies, churches and individuals that work together to make the warming center possible.

“This community has a big heart,” she said. “People who come to the warming center get a shower, a hot meal, a health check and lots of love from our volunteers.”

The coalition hopes to see the warming center evolve into more than just a temporary respite for local homeless people, becoming a “transition to work” program with classes in things like money management and opportunities for people to secure some type of permanent shelter.

That will take time, manpower and money, much of it yet to be raised.

Meanwhile, on nights when the forecast calls for temperatures of 40 degrees or lower, the warming center opens its doors to all the ”Freds” who need it.

Most, Muncy said, do not fit the stereotypical image of the homeless as ne’er-do-wells or people struggling with addictions. Some are victims of bad luck, bad choices or both. Recently, more women and children have sought help at the center.

“A lot of them have just fallen through the cracks,” Muncy said. “They are very respectful and very appreciative.”

A sign on the wall of Mary Jane Cleveland’s office at Twin Fountains sums it up.

“Success,” it says, “is making a difference in the lives of others.”

For information on pick up sites or rides to the warming center, contact LaGrange Housing Authority, at706-882-6416. To donate or volunteer, contact Muncy, chairwoman of the Troup County Housing Coalition, at 762-822-1712.