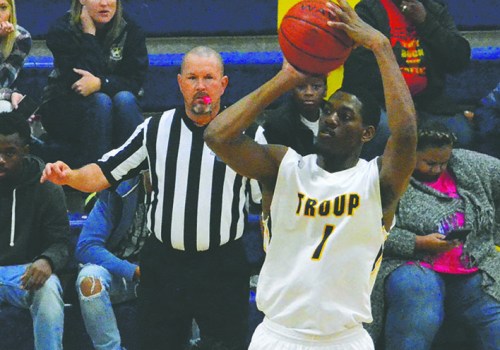 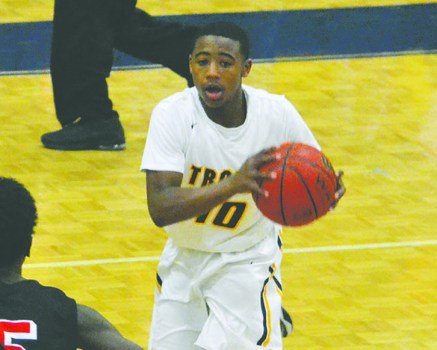 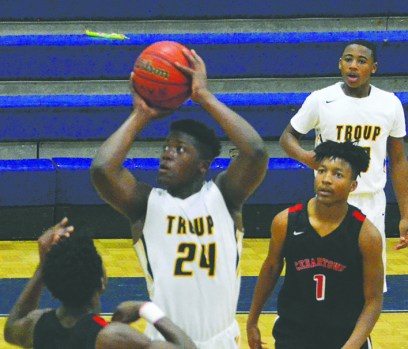 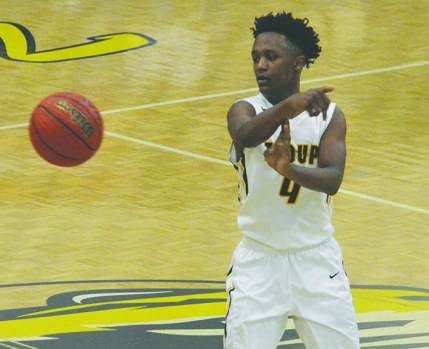 LAGRANGE – Someone needed to step up and hit a big shot, and Montez Crowe was up to the challenge.

The Troup Tigers were trailing by a point with less than three minutes remaining in Saturday’s game against Cedartown, and they were staring at the possibility of dropping a key region game on their home floor.

The Tigers found a way, though.

That was part of a big day for Crowe, who scored 17 points to help the Tigers (9-13 overall) improve to 4-6 in Region 5-AAAA with two games remaining.

Crowe scored eight points and made two 3-pointers in the fourth quarter to help the Tigers surge past the Bulldogs.

“You’ve got to have a kid make a shot, and he did,” Troup head coach Paul Brewer said.

The Tigers were coming off an emotional, hard-fought 66-63 loss to the rival LaGrange Grangers on Friday.

Less than 24 hours later, the Tigers were back on the court against a team they’d beaten by 14 points earlier in the season, and they struggled offensively.

Fortunately for Troup, the defensive effort was there throughout.

Troup was especially stingy on defense in the second half, with Cedartown managing barely 10 points.

“We held them to 12 point in the second half,” Brewer said. “When you do that, you’ve got a chance.

Troup’s leading scorer this season, junior guard Jarrious Jefferson, had 13 points, and he was 7-of-10 from the free-throw line.

Outside of Crowe and Jefferson, the rest of the team combined for just eight points, and Brewer said Cedartown’s zone defense was effective.

“We didn’t move the ball well,” Brewer said. “And we know we’ve got some limitations. If we’ve got the lead, we can force you not to play (the zone). But we didn’t have the lead until late.”

Troup did trail by as many as 10 points in the second quarter, but they got back within seven when Crowe scored at the buzzer.

The Tigers continued to claw their way back into the game in the third period, and they trailed 29-26 heading into the fourth quarter.

Through the first three periods, the Tigers hadn’t made a shot from long distance, but Crowe changed that when he made a 3-pointer to deadlock the score at 29-29 with 7:18 to play.

Then with 5:47 remaining, Crowe pulled down an offensive rebound and scored, and Troup led 31-29.

The Tigers were unable to maintain that momentum, though, and when they got the ball with fewer than three minutes to play, they were trailing 33-32.

The 6-foot-4 Crowe got the ball in the corner, and while he had a defender on him, he used his height to get the 3-pointer away, and the Tigers had the lead, and this time they didn’t relinquish it.

After Cedartown was called for a five-second violation, Troup got the ball back nursing a two-point lead.

Lenntavis Harper found himself with an open look from outside, and he drained a 3-pointer to give the Tigers a 38-33 lead with 1:37 to play.

The Bulldogs got within three with 1:27 to play, but the Tigers scored the game’s final three points on free throws by Jefferson.

Next up for Troup is a road game against Central-Carroll on Tuesday, and it finishes the regular season with a home game against Cartersville on Friday.