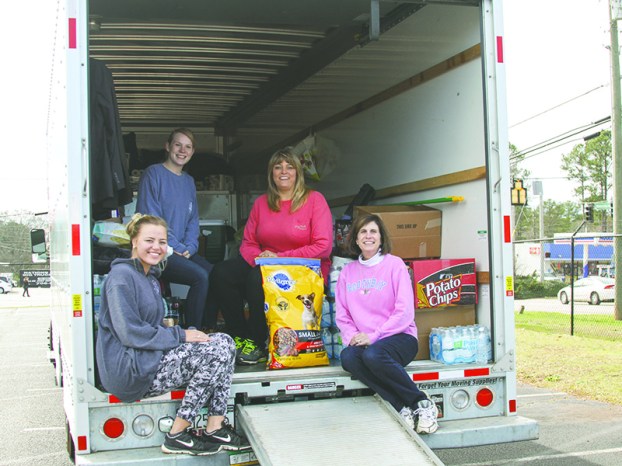 On the way to Albany

LaGRANGE – When Mandy Stephens drove a packed Uhaul truck out of All Self Storage on Saturday, she took with her the love and best wishes of LaGrange residents to Albany’s storm victims.

All Self Storage, the LaGrange Animal Shelter and the LaGrange-Troup County Humane Society teamed up last week to help provide relief to the people and animals affected by last weekend’s tornado. The group felt a call to send help after Doug Stephens drove through the Albany area for work and saw the scope of the storm’s destruction. When, he told his friends and family what he had seen, they knew they had to do something.

“It was really tore up,” said Mandy Stephens, Doug’s wife. “So, I went online… and ended up finding a church that was actually involved in (the relief effort).”

First Baptist Church of Leesburg – which is located just north of Albany – received the donations from LaGrange and plans to distribute them to the community. The church is currently helping those who have lost their homes, and for those who have lost everything, donations like this are one of the few means they have of getting by until they can begin to rebuild their lives in the wake of two large storms.

“They’re feeding them, and they are taking them in,” said Mandy Stephens, who went on to describe the donations. “… Anywhere from clothes to water to yard rakes to dog food, diapers, baby food, canned food, you name it, it is probably on that truck.”

Community members donated new and used clothing, blankets and other essentials as well, and several companies stepped up to donate to the relief effort, including:

“We had a lot of businesses help, and a lot of individuals (donate),” said Ken Boatwright, who owns All Self Storage. “It was pretty much across the board.

The organizers of the relief were impressed with how many people wanted to donate to help the people in Alabany.

“We are just overwhelmed by the generosity of the community,” said Lisa Boatwright. “And we’ve only had three days to put it together… It was like it was Halloween, except they were bringing us stuff instead of us giving stuff away because every time we turned around someone was driving in with things.”

People in Albany and the surrounding area still need help in terms of both donations and volunteers. For information about how to volunteer, visit to City of Albany Disaster Relief on Facebook.

LaGRANGE – The residents of Calumet Village have spoken, making it clear that they want a better neighborhood. The residents... read more