‘Meeting with the Mayor’ 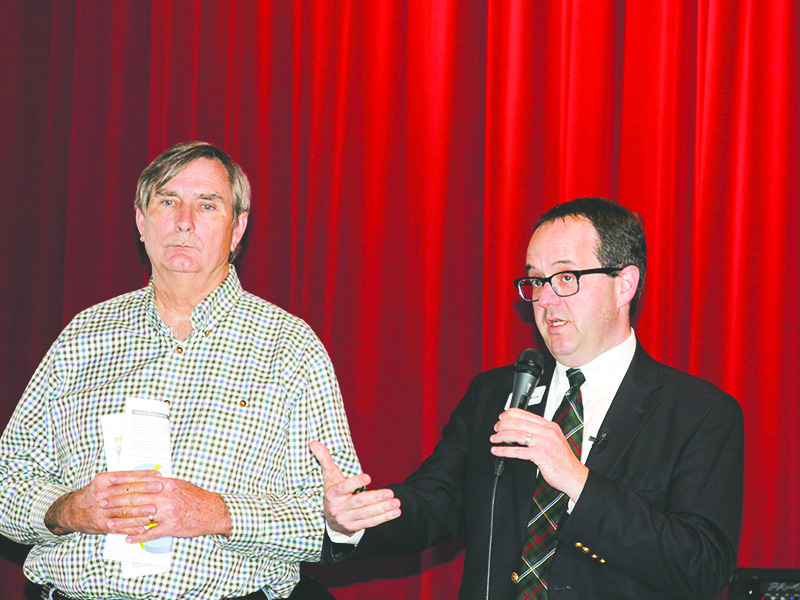 Troup County Commission Chairman Patrick Crews, left, assists Mayor Jim Thornton in answering some questions regarding projects that the city and county are working on together at Tuesday nigh’t meetings with the mayor. (Photo by Alicia B. Hill | LaGrange Daily News)

LaGRANGE – On Tuesday night, LaGrange Mayor Jim Thornton and other local officials gathered together to discuss changes coming to the area and local issues, including concerns regarding what is on its way in the way of local business.

“The city has actually been very successful in the last few years – as has the county – in recruiting new jobs to our community,” said Thornton. “Just in 2016, we announced projects that will result in… approximately 2,500 jobs, and we know that we have to fill those jobs.

“We have to have skilled qualified workers to fill those jobs, and so as a joint project of the Chamber of Commerce and the Troup County Center for Strategic Planning, we have engaged a firm called Avalanche Consulting out of Texas to come to town and to study our workforce needs. To study not only our jobs that are there now, (but) also the jobs that we have recruited that we anticipate coming over the next few years, and then to match that up – with our current workforce, with our current demographic, with our current educational system and programs –to try and see if there are places that we have gaps.”

One of those gaps that was brought up in the meeting was a reported lack of masons and framers who would be able to work as subcontractors to build homes for the people expected to move here for the additional jobs being added to the community.

“In order to continue to keep up with all of the construction and manufacturing that is going on – we have a new hotel that is coming, a lot of other things that are coming to downtown – what we are really seeing in the housing industry is a huge shortage of subcontractors,” said Realtor Kendall Butler. “And I think this is an impediment on us getting more housing that we need locally.”

The city council has discussed the need for more housing on numerous occasions, but looking to the availability of subcontractors has not been as closely considered, though the LaGrange-Troup County Chamber of Commerce does hope to find ways to further study such needs through its Talent Needs Survey at troupworks.net.

“We don’t need to forget about all the other jobs and professions that are out there – as you say – the electricians, the plumbers, the carpenters, etc.,” said Thornton. “And certainly even at the city of LaGrange, we have an ongoing need for electricians and plumbers in the water department and some of those trades.”

A variety of other issues were discussed at the meeting and residents who were not able to be at the first meeting will have the ability to go to one of the remaining three Meeting with the Mayor events at: