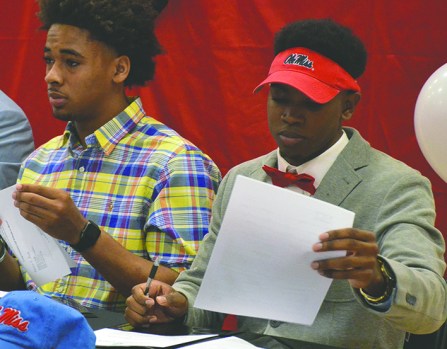 HOGANSVILLE – His recruiting journey over the past month has carried him to Washington, Colorado and Ohio, but when it came time to make a decision, Braylon Sanders opted for a school in this part of the world.

Sanders, who had a phenomenal senior season as a wide receiver for the 13-1 Cavaliers, has signed a letter of intent to play football for the Ole Miss Rebels.

Sanders made it official when he signed his letter and faxed it in Wednesday morning, and he was a part of the school’s signing-day celebration that same day.

Ole Miss has always been a favorite option of Sanders’, though, and he’s looking forward to becoming a Rebel and working with quarterback Shea Patterson, who did some big things as a freshman.

“He was a freshman last year,” Sanders said. “As soon as Chad Kelly went down, he stepped in and got right in and did his job. So I’ll have three years with him.”

Ole Miss is getting a big-play receiver, who also played quarterback during his time at Callaway.

As a senior, Sanders was extraordinary.

He had more than 40 catches and averaged better than 25 yards per reception, and he had 16 touchdowns through the air.

Sanders also threw three touchdown passes, he had a handful of scoring runs, and he even scooped up a fumble and raced 100 yards for a touchdown.

Sanders’ greatest moment came in a thrilling 35-34 road win over Screven County that secured a spot in the final four.

Sanders had four catches for 94 yards with two touchdowns, and he also returned the second-half kickoff for a score.

On the game-winning play, Sanders had a 47-yard touchdown catch from Dylan Johnson on fourth down.

As Sanders approached the end zone, he took off and soared across the goal line, capping a 98-yard drive.

Sanders had a quiet first half as the Cavaliers fell behind, but he dominated the second half, beginning with his kickoff return.

“He’s special,” Callaway wide receivers coach Kareem Douhne said. “He just had a look in his eye. He wanted the ball. Coming out of the half, he just said coach we’ve got to get it done. He said if I need to block, I just want to get it done. And he wasn’t going to be denied, bottomline.”

Sanders didn’t play football as a freshman, and he broke onto the season with a productive sophomore season as a wide receiver.

Sanders began his junior season as a quarterback, and he was terrific in that role until he was injured midway through the year.

When Sanders returned, he was back at wide receiver, and that’s where he remained.

As a senior, he was a favorite target of Johnson’s, and he delivered in a big way.

“He’s so under-rated to me,” Callaway offensive coordinator Matt Napier said of Sanders. “He is super-talented, and he is a super high-character kid.

“He’s the type of kid you want on your team. He’s an explosive play-maker.”

During Wednesday’s ceremony, Sanders had two hats lined up in front of him, one from Colorado State, and one from Ole Miss.

When Sanders was introduced, he put on an Ole Miss cap, putting an end to the recruiting process.

Sanders said he was grateful for all of the folks who were there for the ceremony, including his teammates, friends, coaches, and family members.

“It means a lot,” Sanders said. “It just shows how many people support you. A lot of people came out to see us five seniors sign. It means a lot to us.”

Sanders also remembered a former teammate who would have been a senior this season.

Kavon Zelaya was a teammate of Sanders’ at Callaway Middle School, and he died when he was in the eighth grade.

Sanders said Zelaya was been with the team throughout this season.

“He’s been looking down on us the whole way,” Sanders said. “We did it all for him. We did good, the seniors. We love each other very much. We’ll continue to grow with each other.”

In the coming weeks, Sanders will look to help the Callaway basketball team achieve some big things.

Then soon enough, Sanders’ time as a Cavalier will be at an end, and it’ll be time to put on the Ole Miss uniform.

“Coach (Hugh Freeze) told me to come in and compete, and just play hard, and do everything the right way,” Sanders said.

OF NOTE: For more photos from Wednesday’s signing ceremony, check out facebook.com/LDNSports