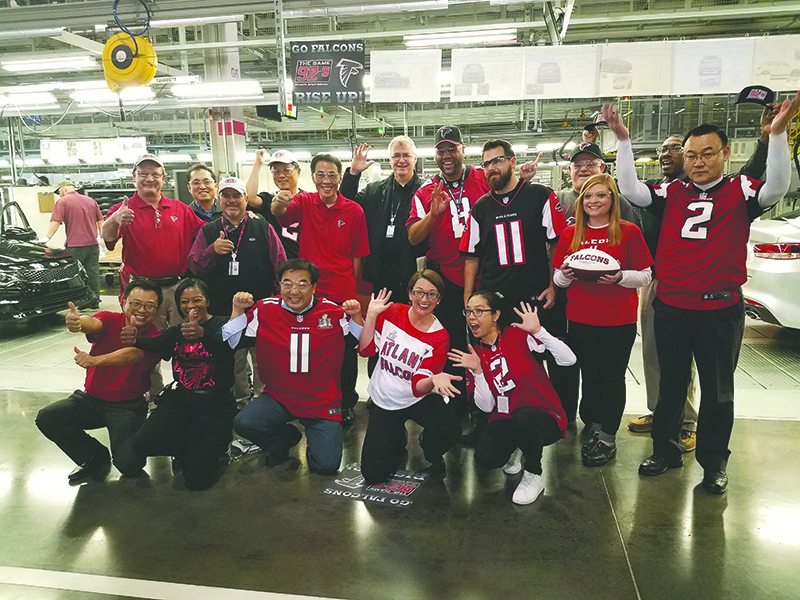 WEST POINT- This year’s Super Bowl party got started early and was in full effect Friday afternoon at the Kia Motors Manufacturing plant in West Point.

With the home state Atlanta Falcons set to make their second Super Bowl appearance in franchise history against the AFC champion New England Patriots in Houston on Sunday night, the automobile manufacturer company decided to have a celebration for the Kia employees.

All throughout the day, hundreds of employees in the plant sported red, black and white Falcons jerseys and hats to show their football spirit and passion for the Dirty Birds. On the assembly line, Kia had a sequence of 51 cars – black, white and red (all Falcons colors) – go down the line where a group of guests could see the Falcons colors on display.

The unique thing about all 51 vehicles was each of them had a decal of the Falcons logo on the side as they ran down the line.

“Just for today, having these 51 cars out, we just wanted to highlight the Falcons,” said Stuart Countess, the CAO (Chief Information Officer) at Kia Motors.

Numerous Kia employees took some getaway time to be in multiple group pictures as Kia vehicle after vehicle passed by.

“From a team member point of view, we’re doing this because we know there are a lot of Falcons fans out here,” said Countess. “It’s exciting living in Georgia right now and I think they appreciated it.”

So, what about a prediction for Super Bowl 51?

“I’m pulling for the Falcons,” said Countess. “I think they have a good defense. Just make sure Matt Ryan shows up.”