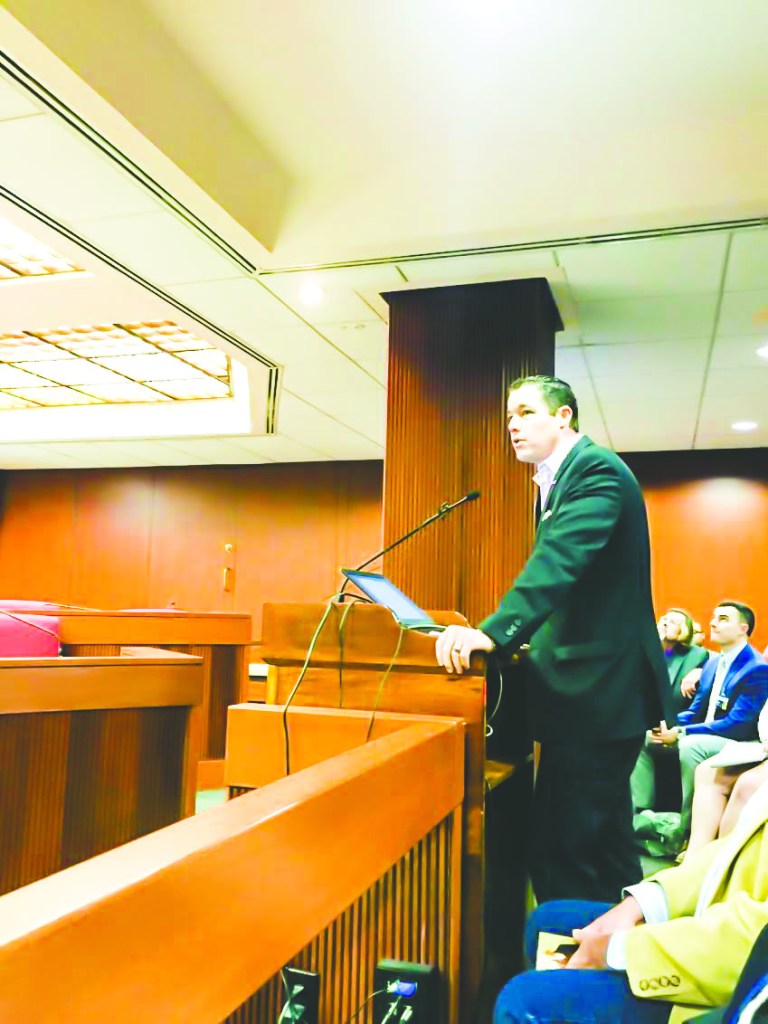 Dale Jackson testifies before the Senate Health and Human Services subcommittee on Wednesday at the Georgia State Capitol. (Photo: Submitted)

ATLANTA – Dale Jackson did not mince words with members of the Georgia Senate Health and Human Services subcommittee on Wednesday at the state capitol.

The group of legislators, along with Jackson and several families, heard the first reading of SB 16, authored by state Sen. Ben Watson, R-Savannah. The measure proposes lowering the cap of THC (Tetrahydrocannabinol, main mind-altering ingredient found in the Cannabis plant) from a 5 percent level to a 3 percent level and adds Autism onto Georgia’s state registry.

The revised percentage would change the amount of cannabis oil a patient would have to purchase, said Jackson.

But the addition of Autism would make it legal for Jackson’s son Colin, 8, and other children with the disorder to be treated with cannabis oil in Georgia.

That is what Jackson and several families at the Senate hearing were hoping for, anyway.

Legislators on the sub-committee voted to add Autism onto the state’s registry, Jackson said. But card holders with the disorder would have to be at least 18 years old.

Jackson was shocked – and dismayed. He expressed his opinion just minutes later when he testified before the subcommittee.

“Their excuse was children are still developing up until that age,” Jackson said. “But I argued that I am giving my child cannabis oil so that he can develop at all … For those of us in the Autism community, we know at that point it is too late. You’ve lost everything if you try to wait until 18 to treat Autism.”

The measure passed in the Senate subcommittee and will now move onto the full Health and Human Service committee. Jackson hopes the proposal will be amended in the Autistic community’s favor as the legislative session continues.

“It’s not something we like, but at the same time we don’t want to scream and yell, ‘The sky is falling’ just because of one little thing that got added (to the proposal) or taken out,” he said. “It’s a long process and we have a long way to go.”

The same day, HB 65, authored by state Rep. Allen Peake, R-Macon, was heard by members in the Medical Cannabis Study Committee within the House of Representatives.

Peake’s proposal adds Autism, intractable pain, AIDS and PTSD onto the state’s legal medical marijuana registry, said Jackson. The measure also clears up language concerning cancer in the original bill (HB1, or Hayleigh’s Hope Act). The amendment would allow all patients diagnosed with cancer to legally use cannabis oil – and not just those people considered to have “end stage” cancer.

Jackson said the House sub-committee decided to amend the proposal before passing it on to the full Health and Human Services committee.

The hearing in the House will take place Wednesday.