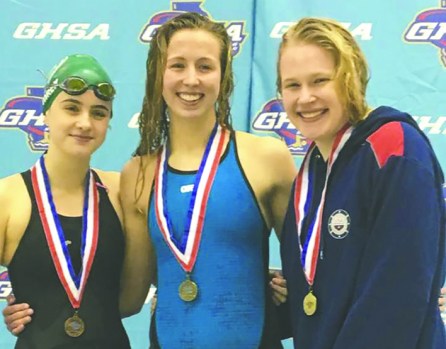 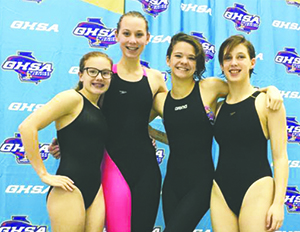 ATLANTA – She finished in style.

In her final high-school competition on Saturday, LaGrange High’s Allie Paschal delivered a memorable performance in the state swim meet at Georgia Tech.

Paschal, who’d come so close to winning a championship in her previous trips to state, broke through on Saturday and finished first in the 100-yard backstroke in a thrilling race that featured swimmers from Class A to Class AAAAA.

Paschal and Bentz ran away from their fellow competitors almost from the start, and they were side-by-side the whole way.

When they touched the wall at the end, it was a dead heat, and they finished tied at 54.66 seconds.

In the Class AAAAAA and Class AAAAAAA finals, the winning time was 55.88, so Paschal’s time was the best in the state, regardless of classification.

It was the culmination of a phenomenal prep career for Paschal, who will join the Georgia Tech swim team this fall.

After accumulating two top-five performances as a sophomore, Paschal was second in the 50-yard freestyle last season, and third in the 100-yard backstroke.

So in three state swim meets, Paschal has six top-five finishes, including a state championship.

Also participating at state was a relay team from Troup.

Evelyn Johnson, Kate Moore Tessa Pacelli and Belinda Hart made it through to the finals in the 400-yard freestyle relay, and they finished 19th with a time of 3:59.

Troup had the 19th-fastest time in the preliminary round to earn one of the 20 spots in the finals.

That same quarter also competed in the 200-yard medley relay.

Three of those swimmers are freshmen and one’s a sophomore, so the future is bright for Troup’s program.