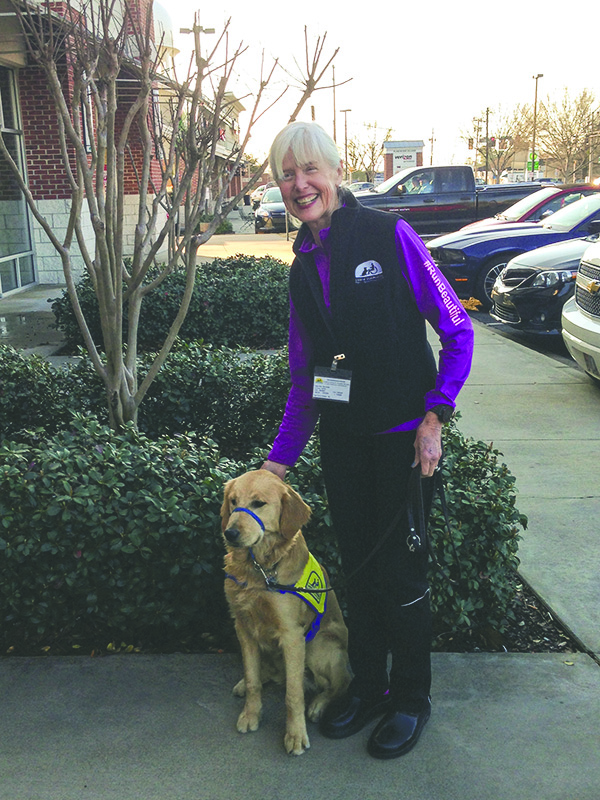 Karl, a service dog in training, sits patiently at the request of Sue Landa who is training him as part of the Canine Companions program. (Photo by Alicia B. Hill | LaGrange Daily News)

LaGRANGE – Being a service dog is hard work, and learning how to be a service dog is just as hard, especially for a friendly golden retriever like Karl, who is currently working with local puppy trainer Sue Landa.

“I think it’s a matter of education,” said Sue Landa.

Landa raises service dogs for the non-profit organization Canine Companions for Independence, which was founded in 1975 and breeds, trains and raises hearing dogs, service dogs that help with physical tasks, facility dogs that work with clients in a special needs environment and skilled companions who “enhance independence for children and adults with physical, cognitive and developmental disabilities.”  The program is one of the oldest service dog training programs in the country, and it runs on the hard work of volunteers like Landa and her husband.

“It’s been 18 years,” said Landa. “… It was something that my husband and I always wanted to do, but we didn’t know how you got to be training service dogs.”

Landa and her husband Scott Landa met a service dog trainer at an event at Callaway Gardens who introduced them to the Canine Companions program. That summer, Landa spent weeks going to the puppy school to observe to make sure that she was ready for the commitment of raising a service dog.

“I loved the people, and I was impressed, and I liked their mission,” said Landa. “I mean, this was to provide highly trained assistance dogs to people with disabilities and make it possible for people to get them.”

Puppies in the program spend the first eight weeks with a breeder before moving on to live with a puppy trainer – like Landa – who spends the next 14 to 18 months working with the puppy on basic obedience training, socialization and care of the dog.

“My first dog’s name was Susan,” said Landa, who received the puppy after she had already been named. “… Karl is my fifteenth puppy, and there is no question that it is a 24/7 little volunteer job, so we take care of all the expenses and the training and socialization. I go to class every Friday with other puppy raisers like me.”

This early training forms the framework of the future skills the dogs will need to serve as service dogs.

“When I teach a dog to shake paw, and do an up with just paws, the professional trainers will put those two commands together and (the puppies) will learn how to turn on and off light switches,” said Landa. “There is a whole wall in the training center filled with light switches, and those kind of things. So, I teach 30 basic commands, and I take him to the training center in Atlanta, and I take him to Starbucks where…he is so distracted.”

When Landa first started working with Canine Companions, trainers only got a year with the puppies, but the time has increased since then to allow the dogs to learn more and mature more before moving on. When puppy trainers have done their job, the puppies are sent to professional instructors who help the dogs master over 40 commands in six to nine months. After the dogs have completed this final round of training, they are able to be matched with the people they will be helping.

“He may go to be a full service dog which performs tasks – such as picking up dropped objects, opening doors, carrying small packages, grabbing the phone when it rings,” said Landa. “He might be a hearing dog. He may be a facility dog, like we have several Canine Companions at the Shepherd Center (a hospital for spinal cord and brain injuries) in Atlanta. He may be a skilled companion dog – they usually go to children with a parent as a facilitator. I don’t know right now what he will be specifically… They decide – the professional trainers – once he goes to advanced training where his talents lie, and also at the same time I’m training, people applying – people with disabilities are applying for these dogs – so they are also seeing what the needs are at that particular time.”

While many different breeds of dogs can be trained to be service dogs, Canine Companions exclusively breeds labrador retrievers, golden retrievers and a cross of the two breeds for their program.

Individuals who receive a service dog through Canine Companions are not charged a fee as the entire program is funded through donations and fundraising efforts. The program also has over 3,000 volunteers, many of whom are the puppy raisers who pay for the cost of raising the puppies out of their own pocket. To learn more about the Canine Companions program, the puppy raisers or fundraisers go to http://www.cci.org.